Google Showing Ads In Chrome Browser, Is This The Beginning Of The End? - gHacks Tech News
ghacks.net

Google Showing Ads In Chrome Browser, Is This The Beginning Of The End?

Internet users are accustomed to ads on Internet pages. One of the most prominent advertisement services used these days is Google Adsense which is available for websites, searches on websites and for mobile devices. Adword ads dominate the Google search result pages, and other Google properties are also displaying their fair share of ads.

Salimane Adjao Moustapha recently posted a photo of another place where Google (seemingly) has started to display ads: the company's own Chrome browser. The screenshot shows a new tab page of the Chrome browser. The Apps section is open and at the top of it is an ad for Google's own Chromebook. It states: Get a Chromebook for the holidays: the computer powered by Chrome.

The first part of the ad is underlined. It is not clear where it leads to as it is not revealed by Salimane, and I was not able to reproduce it. 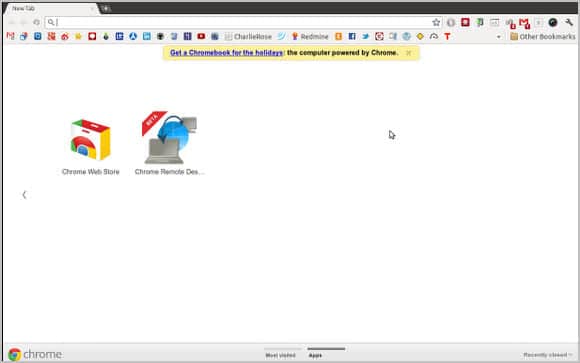 The post on Google Plus sums up all the different opinions about the ad in Chrome. Some say it is Google's right to display ads because the browser is free. Others that they should not do so without giving the user control over the ads. A third group is suggesting to switch to Firefox or Chromium. And a last group is angry but not angry enough to switch just yet. It would not make much sense either at the time considering that the majority may not have seen ads in Chrome yet.

I'd like to know your opinion about ads in web browsers. Do you think it is ok for Google to display ads in the browser, especially if it is for other Google products? Or would you say that ads in a browser are a no-go, regardless of what they promote?

My personal opinion on the matter is that Chrome has turned adware if Google makes the decision to display these kind of ads to all Chrome users. It does not really matter if the ads promote Google products or third party products, an ad is still an ad regardless of what it promotes or tries to sell.

Martin Brinkmann is a journalist from Germany who founded Ghacks Technology News Back in 2005. He is passionate about all things tech and knows the Internet and computers like the back of his hand. You can follow Martin on Facebook or Twitter
View all posts by Martin Brinkmann →
Previous Post: « Mouseover Popup Image Viewer Userscript
Next Post: FastestFox, FastestChrom, Faster Browsing Add-ons »