Steam is a popular online game distribution platform by Valve Software, the creators of Half-Life. It was definitely one of the first movers in the niche and moved from a rough start to a popular platform used by millions of gamers. Steam for the most part works just fine, the platform does have a few issues though like the inability to store games on different hard drives if storage space runs out or the high price of new games.

I have addresses the storage issue in the past here on Ghacks. It all started with the guide How To Move Large Apps Or Games To Another Drive, followed by a review of Steam Mover which has been specifically designed for Steam.

Especially the rise of Solid State Drives has fueled the development of tools such as Steam Mover, or Steam Tool Library Manager which I review today.

The program, just like all the others, is using NTFS Junctions to move Steam games to another hard drive. For that, it requires that Steam is installed on an NTFS partition. Here is how it works.

You need to install the software before it can be used. Steam and your games collection are identified automatically by Steam Tool Library Manager. It is not possible to switch directories or to select directories that already contain data, Steam Mover is more flexible in this regard.

All you need to do is to pick a destination directory on the right side of the interface. Just browser to a folder on another hard drive where you want to store some of your Steam games to make room on the Steam partition. Once done select a Steam game and click on the Move to Storage button. 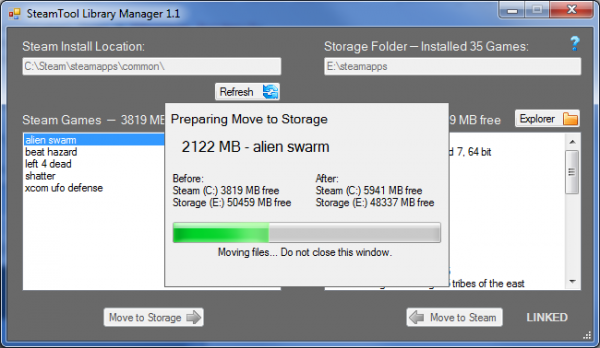 Update: The website is not responding right now. I have uploaded the latest version of the program to the Ghacks server. You can download it from here: [Download not found]