One of the issues that users from all over the world may have experienced with the recently released Windows 8 Developer Preview is that the interface language of the operating system was only available in English. Big problem for users who want to try the release but do not speak English at all, or those who want to test the release in another language.

While it is unlikely that the installation of language packs causes issues on the system, it is not recommended to install the language packs in a productive environment without prior testing. 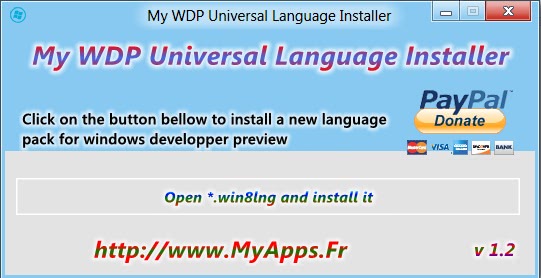 The developers have converted the Windows 7 Service Pack 1 language packs to Windows 8 packs. It is likely that part of the Windows 8 interface, especially new interface elements and menus, are not completely translated.

It is likely that the developers will add additional language packs, e.g. German, in the coming days.

When can you expect official language packs or Windows 8 localized downloads? If Microsoft copies the development phases of Windows 7 language packs will become available with the Windows 8 Release Candidate which is expected to be released in mid 2012. (via)

Previous Post: « Desktop Icon Text On the Right? D-Color Does The Trick
Next Post: Add Snow To Your Desktop With DesktopSnowOk »