With a focus on touchscreen devices - which are predominantly mobile in nature - comes the requirement to reduce a computer system's power consumption to increase its battery life. According to a new blog post over at the Building Windows 8 site, Microsoft has made important changes to their upcoming operating system's power consumption. The post, like many other on the blog, offers insight that goes beyond the simple announcement that Windows 8 will be at least as power efficient as Windows 7, and more power efficient than other Microsoft operating systems.

Battery life is obviously a core reason for optimizing operating systems in this regard. Another factor is the cost of energy. Users and organizations save money running energy efficient systems, especially in times where energy costs reach new heights every year.

Microsoft reveals details about their testing procedure in the blog post. More interesting from a user perspective are software based changes that have an impact on a computer's energy consumption. One example is provided.

If you have played around with the developer preview of Windows 8, you may have noticed that Metro UI applications get suspended instead of killed when you open the Task Manager. In fact, there was not even a way to kill Metro UI applications right away in the Metro user interface. Microsoft calls this method Background Tasks which gives applications the ability to "run app code even when the app is suspended".

Suspending apps is beneficial to a system's power consumption in cases where users would not close them otherwise.

Related to this are improvements in application idle durations on Windows 8. The idle state is essential from a power saving point of view. A longer idle period duration is beneficial to a system's overall power consumption. Microsoft has managed to increase the idle period duration significantly under Windows 8. Take a look at the following chart.

It is interesting to note that Microsoft is not providing a direct comparison of power consumption under Windows 7 and Windows 8. While this may have something to do with the fact that the operating system is still in development, that's what users want to see. Will Windows 8 be more power efficient than Windows 7? Will battery life last longer on the same hardware? It will be interesting to see how the beta fares in term of power consumption. 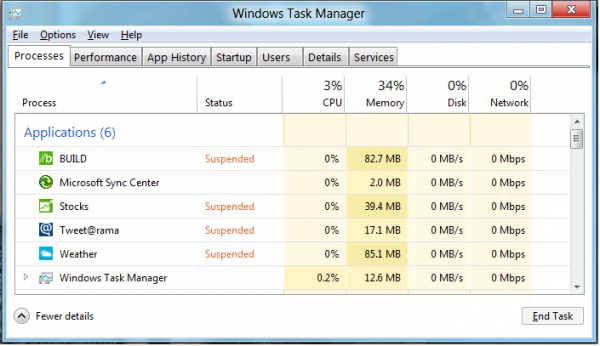 Article Name
Windows 8 Power Consumption, Battery Life
Description
A look at the improvements that Microsoft made to the battery life and power consumption of the Windows 8 operating system.
Author
Martin Brinkmann
Advertisement