Internet Explorer 10 will not only support spell checking but also auto correction of text which works identical to that of Microsoft's Office suite. 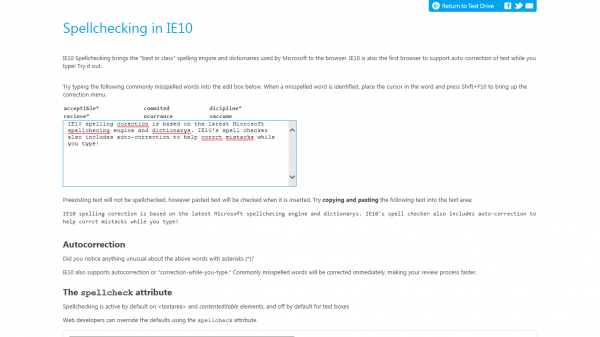 Auto-Correction: When you enter a misspelled word in a text area form Internet Explorer 10 may auto-correct the entered word while you may continue to type in the form.

Spellcheck: Words that are not spelled correctly will be underlined in Internet Explorer 10 just like they are in other web browsers that are already supporting spell checking. A right-click on an underlined word displays the suggest correction in the context menu where it can be selected. A right-click on an auto-corrected word brings up the option to force the browser to ignore the word from now on to stop auto-correcting it.

The spelling correction uses Microsoft spellchecking engine and dictionaries. It is important to note that spell checking is by default only enabled for text area HTMl elements and not text boxes. Microsoft notes that web developers can override the defaults.

It is not clear if Internet Explorer 10 users will also be able to change the behavior of the web browser's spell checking and auto-correction capabilities.

The integration of spell checking and auto-correction in Internet Explorer 10 is a step long overdue, especially when you consider that IE is used by many organizations as the primary browser.