A Closer Look at the Lightning Calendar Add-On For Thunderbird

One of the main points of criticism in regards to the email client Thunderbird was the missing calendar. While it was possible to install an early version of Lightning in previous versions of the email program, it was not really comparable in functionality with the calendar in Outlook or Google Calendar.

Lightning in terms of compatibility has made a step backwards. The calendar only supports Thunderbird 8 and later versions, which can be a serious problem for users who do not just jet want to upgrade to the new version of the desktop email client.

Mozilla has this to say about Lightning:

Lightning 1.0 is the fully integrated calendar Add-on for Thunderbird that lets users organize their schedules and lifeâ€™s important events as a natural part of their email experience. Lightning gives users the ability to manage multiple calendars, create daily to do lists, invite friends and colleagues to events and meetings, and subscribe to publicly available calendars. With over a million active users, Lightning 1.0 is the calendar solution that users rely on to help them manage their daily lives at work and at home.

When you look at the release notes of Lightning 1.0 you will notice that there are not really that many notable changes to report. Most of the changes are bugfixes that resolve issues of previous Lightning versions. Lightning 1.0 has received some cosmetic changes, most notable new user interface styles for all calendar views. 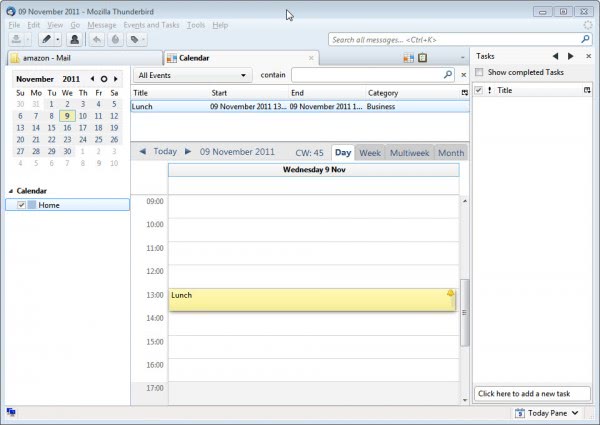 When you install Lightning in Thunderbird you will notice - after a restart - that it adds a column on the right side of the program. Here you see the current date and calendar week as well as events for today, tomorrow and "soon". Lightning adds the Events and Tasks menu to the top menubar.

An import option is available supporting iCalendar and Microsoft Outlook comma separated value files. It is furthermore still possible to synchronize Lightning with Google Calendar and other remote calendar locations (via New > Calendar > On the Network).

New Lightning users should take a look at the known issues highlighted on the Lightning 1.0 release notes page.

Are you using a calendar application? If so, which?

Update: Lightning has been updated many times since it was released as a stable extension. The most recent version of Lightning is 2.6.4 which is compatible with all recent versions of the Thunderbird email client as well as SeaMonkey.

If you are new to Lightning, you may want to browse the official help topics which include guides on how to get started and configuration.

Proton Mail: these features are planned for the email service