With the rise of Solid State Drives came software from hardware manufacturers to manage and control those drives in a computing environment. Intel's SSD Toolbox has recently been released in version 3. We have covered both the initial Intel Solid State Drive (SSD) Toolbox release and Intel Solid-State Drive Toolbox 2 release before. Lets see what's new in the third major installment of the SSD toolbox.

Users of previous versions of the Intel Solid-State Drive Toolbox will notice that the new installment ships with a redesigned interface. The start screen display information about all hard drives connected to the computer. The drives are separated by Intel SSD and Other Drives tabs. Information about the drive model, firmware version and serial number are displayed here next to drive health and estimated life remaining bars. 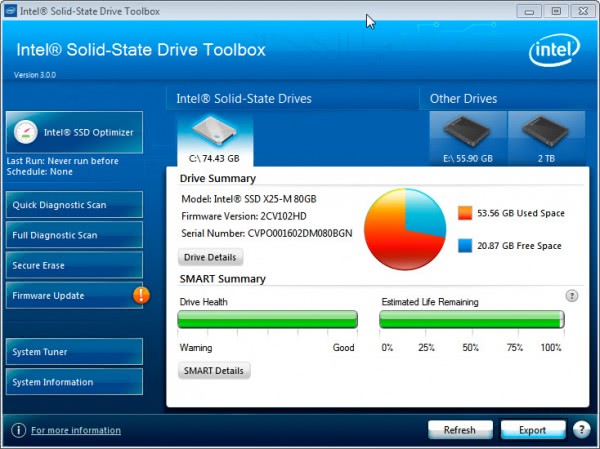 Probably the biggest new feature in this version is the new firmware update button that checks online for new firmwares for the SSD and informs the user if new versions are available. Users can install the new firmware right away from within the program interface and Windows. Intel surprisingly though only recommends to minimize system use during the operation and not to create a backup of the data on the drive prior to installing a new firmware. 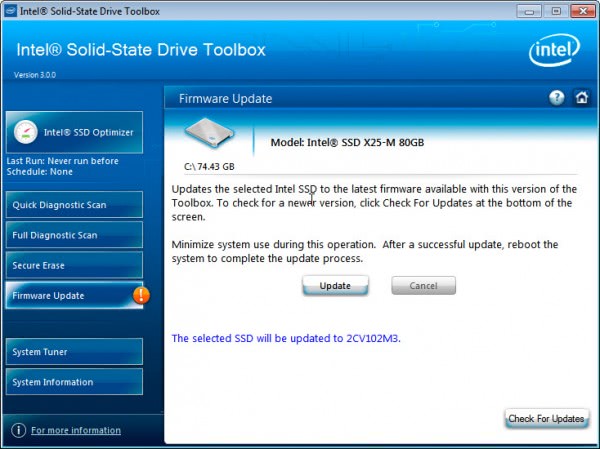 The program still offers to run the Trim command regularly on Windows operating systems that do not support it to retain the performance levels.

Windows 7 and newer users who can make use of the built-in Trim functionality can use other features of the toolbox that have already been available in previous versions of the application. Among them the System Tuner which runs a quick check to see if operating system features such as the disk defragmenter, ReadyBoost or Superfetch and Prefetch are configured optimally.

The Secure Erase feature on the other hand can be used to remove all data from the drive which can be handy before selling, lending or giving it away.