Google, the company that conquered the Internet by storm by offering mostly free services is slowly being turned around to make even more money than it is currently. One of the latest strikes in the hearts of Google advocates is the introduction of Google Maps Api access limits. What does that mean?

Lets take a look at the limitations. The price for excess map loads varies from $4 to $10 per 1000 map loads once the limit is reached. The daily limit according to the Google Maps FAQ may begin by 2500 map loads or 25000 map loads depending on the Maps Api used. 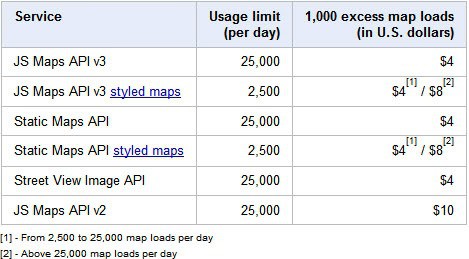 While it is unlikely that a small site will hit those usage limits, a popular third party service using the Apis of Google Maps might very well.

According to Google, developers then have three options to deal with the issue. They first can pay for the excess usage, second try to limit their usage below the limits and third purchase a maps Api premier license (fourth stop offering their services, fifths switch to another Maps provider). A purchase price is not revealed on the web, and interesting developers are asked to contact a Google sales representative.

For very popular sites Maps API Premier is likely to be a more cost effective option. It also offers a number of additional benefits, including terms that permit for-fee and internal use, enterprise technical support, a Service Level Agreement, fixed and invoiced annual pricing, and increased quotas for the Maps API Web Services.

Google notes that site exceeding the daily limitations will not stop working immediately (what they mean is the Google Maps part of those sites). Google will start enforcing the new Google Maps Api limits in early 2012.

Google's motivation to introduce usage limits is to ensure "that even when used by the highest volume for-profit sites, the service remains viable" and to ensure "that Google can continue to offer the Maps API for free to the vast majority of developers for many years to come".

So what is likely going to happen? The majority of sites and developers won't probably notice any difference thanks to the the free map load quota. Some developers on the other hand, those running free and highly popular maps powered services, will be forced into a decision that they probably do not want to make. Some may discontinue their services, others may switch to Bing Maps, and a few may turn their services into commercial services to pay for maps access.

What's your take on the new Google Maps Api usage limitations and Google's drive to turn their free services into commercial ones? Lets discuss it in the comments.