Bruce's Unusual Typing Wizard, Learn How To Type For Free

Most Ghacks readers are tech savvy users who know how to type efficiently. When I visit friends, family or colleagues I sometimes notice that they type very slowly and in no optimal fashion. You have probably encountered two-finger typing users as well who hover with two fingers over their keyboard to find the next key that they want to press on it. I'm not saying that it does not work for them, but it takes a lot longer and more effort to reach the same result.

Bruce's Unusual Typing Wizard has not been updated since 2006, and while that would disqualify most software immediately, I'd like to make an exception in this case. The program works flawlessly on my 64-bit Windows 7 edition and should run on pretty much any other Microsoft operating system as well.

The program offers two options to learn to type. First the typing lessons which starts a series of lessons that help you learn to type, and typing practice which you can use to practice typing full sentences. 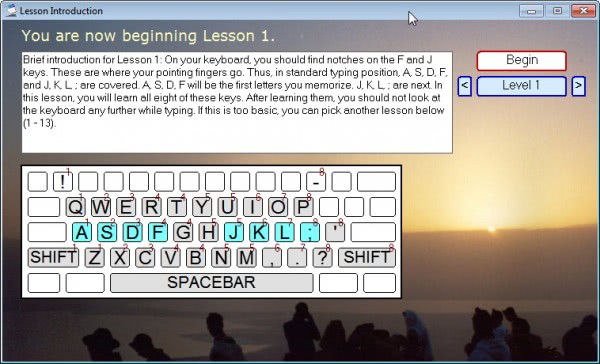 The program guides you through each lesson, explaining it on an introductory screen before the lesson starts. In the very first lesson for instance, it highlights how your hands should hover over the keyboard to use it in an optimal fashion. 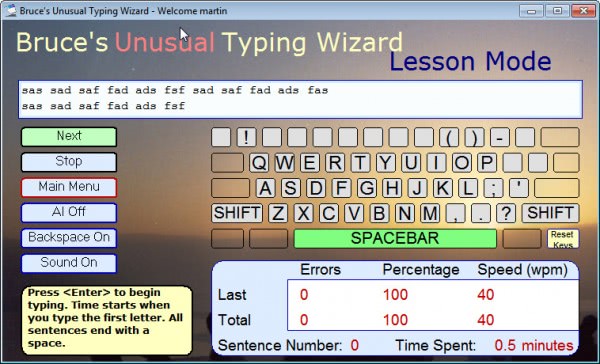 The typing tutor then displays words, phrases and even individual letters and characters in the interface that you have to type. The next letter is always highlighted on the virtual keyboard in the program interface. The window itself indicates the next letter, errors, the overall percentage and the typing speed in words per minutes.

Regardless of those limitations, Bruce's Unusual Typing Wizard is a handy software to learn how to type faster. Windows users can download the application from the developer website.