by Martin Brinkmann on October 28, 2011 in Microsoft, Software - 2 comments

Skype is a voice over IP software that millions of computer users use every day to communicate with each other. The Skype protocol or functionality up until now has not been made available in many third party applications or services. The most prominent example in recent times is without doubt the integration of Skype's video chat into Facebook chat.

Integration with Facebook was apparently just the first step in a much bigger plan. Skype two days ago announced that they are about to release the developing software SkypeKit for Desktop with video calling. With the release, Skype is extending their "developer initiative to include desktop applications".

The new Skypekit version includes the new Video APIs which developers can use to add Skype Video calling functionality to their applications.

The big news here is that Skype is opening up their developer program for a wider range of developers.

Part of those efforts are reflected in the re-designed Skype App Directory which is a directory of desktop applications that work on Skype. The directory groups free and paid applications into categories such as business, call recording, faxing or integrations with popular software. 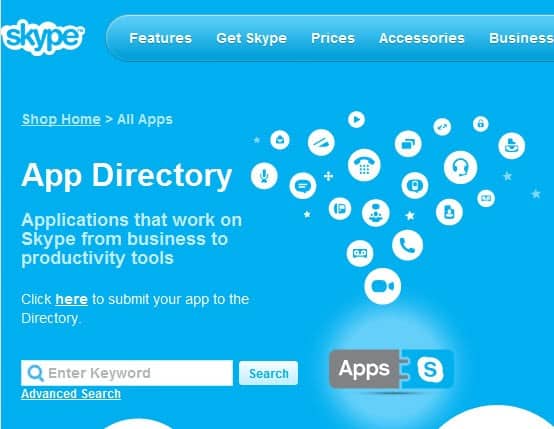 A total of 32 apps are currently hosted in the directory, not a lot but a solid selection of programs for Skype. Included in the listing are for instance the free Skype translator Clownfish or the Skype video call recorder Vodburner.