I'm a Desktop, What are you?

I'm becoming increasingly confused by the whole computing market with all manner of new and, relatively, affordable form factors coming to market.Â  There was a day not that long ago when you had a choice, Desktop PC or Laptop, indeed even laptops were commonly out of the reach of most people and it's only relatively recently that they've become affordable.

Now however we have more types of computing devices than it's possible to shake a stick at, and one thing is becoming clear, the good old desktop PC is becoming sidelined.Â  I wanted to ask you all, which is quite ironic given Martin's post of earlier today, what your opinion is of these devices and what you think of them generally.

The main computing devices we now have include desktops, all-in-ones, desktop replacement laptops, everyday laptops, ultraportables, convertible tablets and traditional tablets.Â  In fact it's possible within all these types not just to get what is probably the perfect form-factor for you, but also something that fits perfectly with the aesthetics of where it will go.

To kick off the discussion I'll start with my own thoughts on my home and home office.Â  I have a desk in my living room with a desktop PC on it, as many of you will have too.Â  It is my aim to replace this with an all-in-one PC before too long.Â  The barrier here for me is that my desktop has a graphics card with the grunt to properly run modern games like Battlefield 3 and all-in-ones often compromise on gaming ability.Â  I also have a laptop, a desktop replacement Dell which I use for work in my home office upstairs.Â  This is a big, heavy machine and hardly portable.Â  It does offer me the storage and power to be a true desktop replacement however in every sense of the word, rather than some of the weedier desktop replacement machines that really don't offer a viable alternative for you. 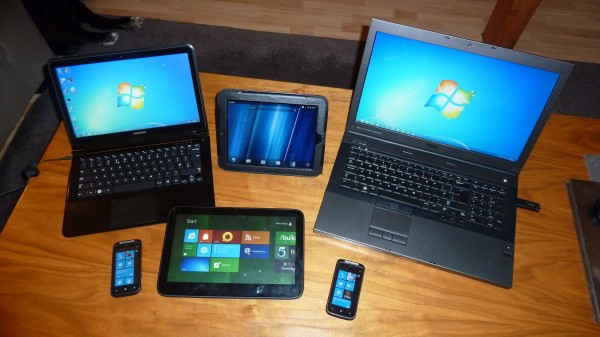 I also own two tablets, a Windows 7 ExoPC and an HP TouchPad.Â  The ExoPC is now used only for work and presentations and the TouchPad is for lounging about on the sofa occasionally when I'm tired.

I have had a couple of Samsung ultraportables on test though, and I'm very happy with the form factor.Â  These new breed of ultraportables, pioneered by the Macbook Air, are sexy enough to suit the modern living room while small and light enough not to get in the way.Â  This is important for a laptop as I doubt many people really want a big grey block in front of them when they're watching the evening news.

If I had to pick one though it still comes back to the traditional desktop for me as this is the only form factor that really offers me the flexibility I need in terms of hardware and storage.Â  Much as I want to banish the desktop from my living room forever, I just don't feel that all-in-ones are there yet in terms of true power and flexibility.

So what's your preference?Â  Are you a desktop person or a laptop guy?Â  Do you prefer all-in-ones and why?Â  Do you have an ultraportable, or do you want one to replace what you have?Â  Have you indeed banished your computer upstairs forever and it's tablet all the way in your main living space?

In short, what is your perfect computing device and why is that?