I have been using MailStore Home for some time to backup and archive my Thunderbird email databases (see Use MailStore To Backup Gmail, Hotmail, Yahoo Emails and How To Speed Up Thunderbird By Archiving Emails).

The developers of this excellent free email backup software have just released version 5 which is more of a bug fixing release than one with many new features. The software's functionality remained mostly unchanged. It is still possible to backup and archive email accounts both online and software based, to search and filter those emails, migrate emails into other applications and even restore emails. Some new features deserve mentioning.

One of the nicest options that has been added to MailStore Home 5 is the ability to "install" a portable copy of MailStore Home on a computer system. This makes it possible to use the software on USB flash drives and other external devices or discs.

Another rather apparent change is the new user interface which gives the program a modern cleaner look. Here are two screenshots, the first showing the new interface, the second the old one. 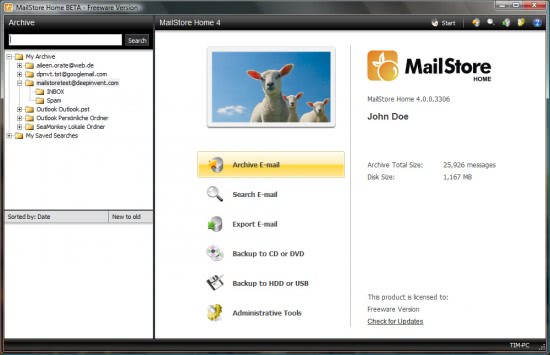 The developers have added an auto configuration feature to the email backup and archiving software. The program tries to automatically detect settings based on the email address entered. This works well for known providers such as Google Mail, Yahoo Mail and others. Manual configuration options are available in case the mail server settings are detected incorrectly.

The last new feature is the ability to run multiple archiving tasks at the same time. Before it was only possible to run one archiving task at a time which limited the software quite a bit, especially for users with multiple email accounts.

The addition of a portable version of MailStore Home is without doubt the most promising new feature of the program.

Windows users can download Mailstore Home 5 from the developer website. the program is compatible with all Windows based operating systems from Windows 2000 on. (via)