Say you have a desktop PC with a wired connection to the Internet. Your router only supports wired connections for that matter, which is the main reason for that. You do have a mobile computer as well, for instance a laptop, tablet PC or smartphone that supports WiFi. You want to use WiFi when at home to connect with the mobile device to the Internet.

You can now configure your desktop PC as a virtual WiFi router if it supports wireless connections, for instance by having a wireless network interface controller installed.

Probably the best option to configure the system to become a virtual wireless router is with the help of third party programs like Virtual WiFi Router or Virtual Router.

Virtual Router is a free software that is compatible with Windows 7 and Windows 2008 R2. It uses the operating system's Wireless Hosted Network feature to turn the computer into a WiFi hotspot. 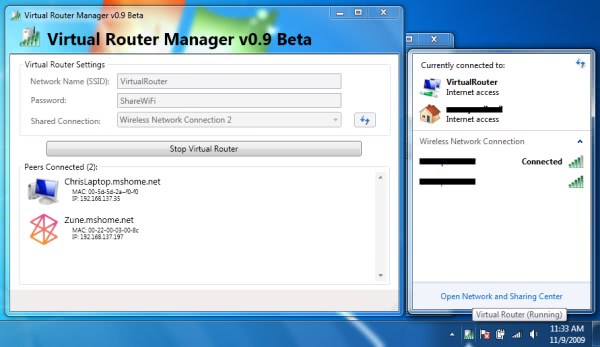 When you start the program for the first time you are asked to configure the new virtual router. You have to pick a name, password and select the shared wired connection for Internet access.

The program uses WPA2 encryption by default with no option to turn that off. This could be a problem if you need to operate devices that do not support the security standard. Then again, you might want to consider upgrading those devices as they reduce the network's overall security. You can download Virtual Router from the project's Codeplex website. Some of the supported devices are listed here on the product homepage.

Virtual Wi-Fi Router is the second program that can be used to turn a wired computer system into a wireless hotspot. 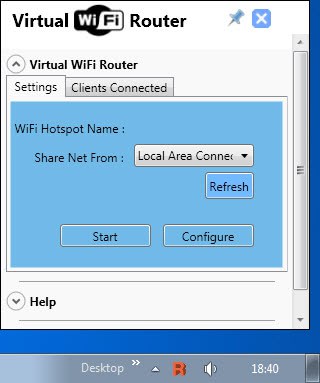 You need to configure the virtual router on first run by clicking on Configure and selecting a Wi-Fi name and password after selecting the wired Internet connection of the computer.

All that's left to do then is to start the virtual wireless connection to allow other devices to use it to connect to the Internet.

The program is also only compatible with Windows 7, Windows Server 2008 R2 and newer systems. It furthermore appears to need the Microsoft .Net Framework that ships with the operating system.

Both programs are free to use even for non tech-savvy users. There is not a lot to configure and provided that the setup is supported by the operating system it should be up and running in less than a minute.