When I first started the Ghacks Technology News blog back in October of 2005, I did not really have any expectations whatsoever. If it would be there after a year, that would be fine. If not, nothing was lost. I also did not really think about making money with the site, or even -gasp- quit my regular job to become a full time blogger. Well, everything changed when the site became popular.

In the beginning I worked two jobs, Ghacks and my regular one. This was a pretty hard time as I had to work before I went to work and after I went home on the site. I was lucky back then that I never experienced any serious down times when I was at work. I'd probably would have taken a sick day or day off then to be able to fix the site.

When the site started, it was all about a tool that a friend of mine had created to make advanced Google searches from the program. It was very handy at that time, but it somehow got dropped along the way. That's actually where the name Ghacks comes from, Google Hacks.

The day that changed it all was when the guide Using Google To find Movies made it on the homepage of the then popular service Digg. The site, only active for about a week, received tens of thousand of visitors from that exposure. I was lucky enough that I added Adsense some time before to the site. When I found out that the site made more than $100 on that day it made click and the idea was born to make this more than a hobby. Without that, Ghacks may have never become what it is today.

It has been six years now and Ghacks is still more or less a one-man show. Sure, I hired some authors to add different perspectives to the site, but it is me who administrates the site, watches over its financials and contributes to the site on a daily basis. It is a full-time job. Surprisingly though I'm still motivated and do not have that nagging feeling that I do not want to "go" to work because work sucks. I love it.

Now that the site has turned six, I'd like to thank each and every one of you for being a visitor, reader, guest, contributor or whatever it is you are to the site. Without your help, Ghacks would not be where it was today, and more importantly, I would still work my 9 to 5 job.

To celebrate the event, I'd like to provide you with the opportunity to win one of ten Ghacks t-shirts. You can take a look at both available shirt designs here: 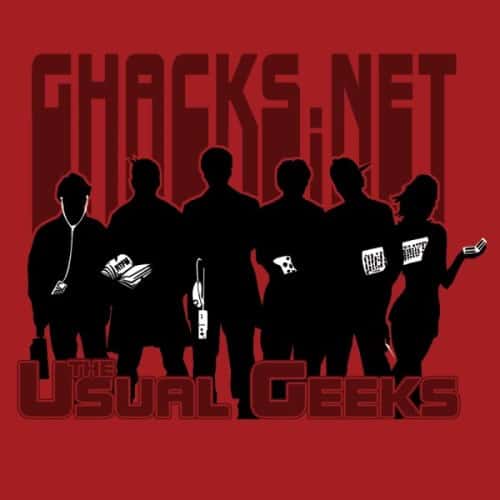 The shirts are of high quality. I still have the first shirts I ordered a few years ago when I started offering merchandise.

All you need to do to win a shirt is to comment here on this thread, or mention the birthday on Twitter, Facebook, Google Plus or any other site on the Internet (that you are allowed to post on and where it is appropriate).

I pick the winners and contact them asking for their shipping address, t-shirt they want and size. Please note that some black shirt sizes are currently out of stock. It may take some time before they become available again. Good luck everyone.

Update: The winners of the shirts have been notified by email, they are: Paul(us), Ivan K., JFP, JimT, Tinwheeler, Kalmly, Mouser, Midnight, Johan Gustavsson and Matias.

Thanks to everyone for all the great wishes and praise, that was really nice for a change ;)

Martin Brinkmann is a journalist from Germany who founded Ghacks Technology News Back in 2005. He is passionate about all things tech and knows the Internet and computers like the back of his hand. You can follow Martin on Facebook or Twitter
View all posts by Martin Brinkmann →
Previous Post: « Ask The Readers: Mobile Access, Smartphone Coverage
Next Post: Win a Windows 7 Tablet, Microsoft Press Books + a secret gHacks bonus Prize! »