Firefox Up And Coming Add-ons

I visit the Mozilla Firefox add-on repository on a daily basis, mainly to see if add-ons have been updated or released that I can review or use on my own. Mozilla recently redesigned the add-on repository which in my opinion is not as intuitive as before.

When you open the new homepage you will see lots of featured add-ons and stuff on that page similar to how Google is promoting extensions on the Google Chrome web store. One thing that I dislike is the fact that version compatibilities are hidden on the add-on pages.

Not everything has turned to the worse though which can be mainly attributed to the new up and coming extensions category that has not been there before. Unlike Most Popular, which is an overall indicator for an add-on's popularity since its release on the Mozilla website, up and coming looks solely at the most popular new add-ons.

The easiest way to display add-ons of that category is to open this link in your web browser. 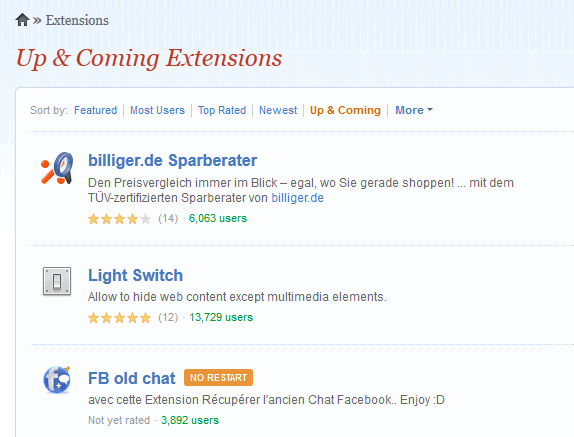 You won't find information about the sorting or rating of add-ons on the up and coming page. I'd assume that it calculates that from user comments, ratings and downloads, but I could be wrong. Regardless of that, it is fair to say that you find mostly new add-ons there that have been uploaded to the repository less than 60 days ago.

There is no guarantee that you find the next big add-on hit there first, but chance is high that you won't miss out on popular add-ons anymore if you visit that site regularly.

Even better, you can subscribe to the listing to receive updates in the feed reader of choice. Please note that the feed is updated whenever a new extension makes it into the up and coming listing, handy if you ask me. Subscriptions are actually available for all different add-on sorting options.

I personally like the idea of the up and coming category, as much as I like to parse the updated category.

Are you using the add-on repository over at Mozilla? If so, what's your favorite category and feature?