I like the idea of booting a computer in a very short amount of time, even though I do not think that it will make such a big impact on desktop PCs.

I boot my desktop PC once in the morning and shut it down at night. During boot I go make coffee and something to eat, and when I come back everything is fully loaded and ready for use.

For mobile devices like laptops though, and situations where the computer is shut down and restarted multiple times throughout the day, the new Windows 8 Hybrid Boot technology could have a huge impact.

Microsoft is very thorough when it comes to improving the operating system. The company starts its feature revelations always with current data and compares it then to data from the improved system.

When it comes to Windows 7, Microsoft noticed that 45% of laptop users and 57% of desktop users where shutting down (and possibly restarting) the operating system. The reason for shutting down the PC, instead of putting it in sleep or hibernation, has several reasons.

A core reason is that some users want their PCs completely off, while others want to preserve as much batter or energy as they can. 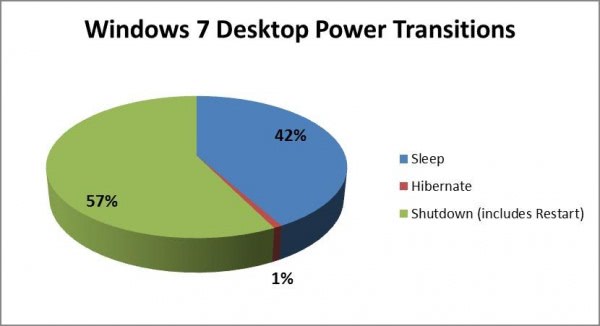 The core difference between the boot process in Windows 7 and Windows 8 is the following:

Microsoft uses hibernation to save the kernel session. Think of it as partial hibernation. The core gain is a speed increase of 30% to 70% on all systems, as "reading the hiberfile and reinitializing drivers is much faster".

But that's not the only reason why it is faster. Microsoft has added multi-phase resume capabilities to the operating system which uses all cpu cores in multi-core systems in parallel to split the work load.

Here is a video demonstrating the fast startup feature of the Windows 8 operating system.

Microsoft notes that the demonstration above used a laptop with an UEFI BIOS. This speeds up the POST significantly.

One thing youâ€™ll notice in the video was how fast the POST handoff to Windows occurred. Systems that are built using Unified Extensible Firmware Interface (UEFI) are more likely to achieve very fast pre-boot times when compared to those with traditional BIOS. This isnâ€™t because UEFI is inherently faster, but because UEFI writers starting from scratch are more able to optimize their implementation rather than building upon a BIOS implementation that may be many years old. The good news is that most system and motherboard manufacturers have begun to implement UEFI, so these kinds of fast startup times will be more prevalent for new systems.

Systems with traditional platter based hard drives and the faster solid state drives will benefit from the faster startup mode. Additional information about fast boot times in Windows 8 are available at the Building Windows 8 blog.