One of the most annoying elements on Facebook in my opinion is photo tag spam that is running rampant on the social networking site.

Especially so since spammers take advantage of the fact that you do not really need to be on a photo to be tagged on it. Even worse, those new photos appear with the message right on your wall, without the ability to do anything about it.

Facebook some days ago announced changes to the way tagged photos would be handled on the site.

Instead of being posted directly to the wall, these photos are now moved to a preview area where the user who was tagged on them can accept or delete the posts.

The same is now true for photos uploaded by a Facebook user. Instead of allowing just anyone to tag your photos or posts, you are now in a position to review the tags to either approve or reject them.

It is now on the other hand possible to tag friends or anyone else on Facebook thanks to the new preview before publishing system.

Facebook is also making it easier for users to control the profile visibility. Instead of having to navigate to sub-menus to make changes to the visibility of specific profile elements, it is now possible to use inline profile controls to handle the settings directly with a click of the mouse button.

In addition, the new visibility button has been made available on each post as well to make it easier for users to understand who they are sharing that post with.

The blog post on the official Facebook blog lists additional enhancements to the sharing and visibility options on Facebook. The new changes, as tiny as some may be, make a lot of sense. Especially the tag preview feature is a godsend, as it allows me to block unwanted posts on my Facebook wall.

Let me know what you think of the changes.

Update: The improved handling of tags on photos uploaded to Facebook is now live which means that using photo tags to spam should be a thing of the past on the site. 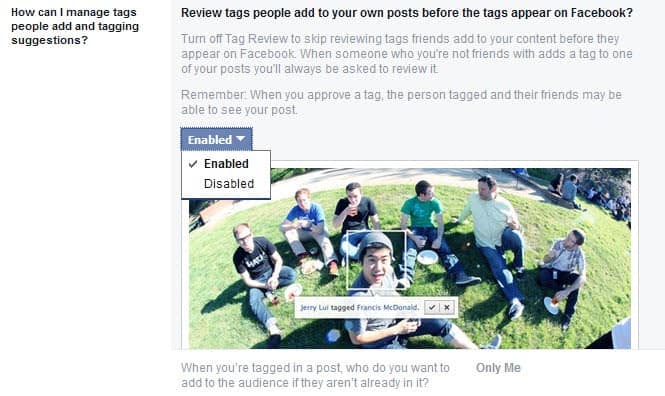 It is however possible to disable the review feature and modify the audience of it automatically: