Don't Want Your Photo To Be Used For LinkedIn Advertisements? Do This!

I have to admit that I'm not a LinkedIn user. I probably should have an account with my Internet business and all, but then again, it feels to me like yet another network that I have to spend time on. So, no LinkedIn for me.

I recently stumbled upon a story over on Connection Agent. The story basically revealed that LinkedIn had automatically opted-in all their users to a setting that allowed them to use their user's names and photos for third party advertising.

Now, the core problem with these kind of things is that they are usually diametrical to what users want. This would not be a problem if the service would be opt-in only, so that users could make the decision whether they wanted their names and photos to potentially appear in third party advertising. Then again, no one would probably do it if that was the case. 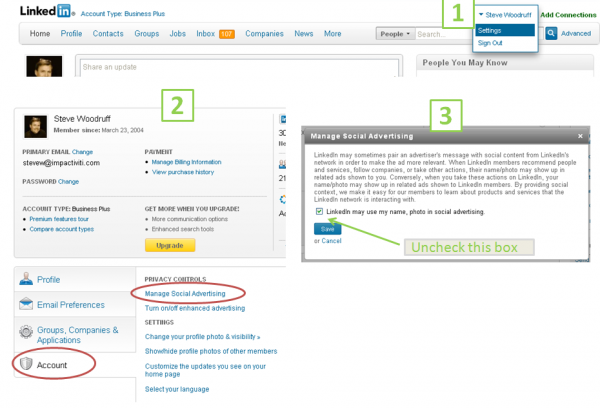 Steve describes on his blog how users can opt-out of the third party advertising. They need to move the cursor over their profile icon in the top right corner on LinkedIn and select Privacy & Settings from the menu that opens up.

On the Settings page they need to select Account. They then need to locate Manage Social Advertising in the column next to Account and de-select the box next to "LinkedIn may use my name, photo in social advertising". Once done you are opted-out of third party advertising.

Update: Please note that the option is no longer available. You find Manage Advertising Preferences here, but those only allow you to opt-out of advertisement being shown to you based on third-party data or on third-party websites.

Now, the real problem here is LinkedIn's sneaky way of enabling this for all their user accounts. The move sounds great from their perspective and will surely please their stock holders. The majority of users may never realize that the option is there, and those that do are probably only opting-out and not closing their accounts because of this. They may be a bit disgruntled but this settles over time.

LinkedIn basically does what Facebook has done before them; Enable a feature for all users automatically that the majority of users, if they knew about it, would not opt-in for.

If you are on LinkedIn and do not want your name or face to appear in an ad that you have no control over whatsoever, I suggest you opt-out of it immediately.

Update: LinkedIn has posted a response called Privacy, Advertising, and Putting Members First on their blog. While the company does not seem intent to change social advertising from automatic opt-in to manual opt-in, they have announced that they will make changes to the ad units.