Firefox Snaporama, Save All Open Tabs

Mozilla is still trying to integrate the tab groups feature, formerly known as Panorama, more effectively into the web browser. You may remember that Mozilla originally planned to integrate Panorama into Firefox 4, but several issues prevented this from happening. Mozilla up until now has been working on fixes to resolve the existing Tab Groups issues. That does not mean that the developers are not working on enhancements for the Tab Groups feature.

One of the enhancements has been released as a prototype add-on for Firefox. It is called Mozilla Labs: Prospector - Snaporama, a restartless add-on that integrates nicely into the browser.

The add-on adds two buttons to the Firefox status bar. Users who do not work with the start bar can move the buttons to another location of the browser. A click on the camera button opens a menu that lists all bookmarks folders and an option to create a new snapshot. 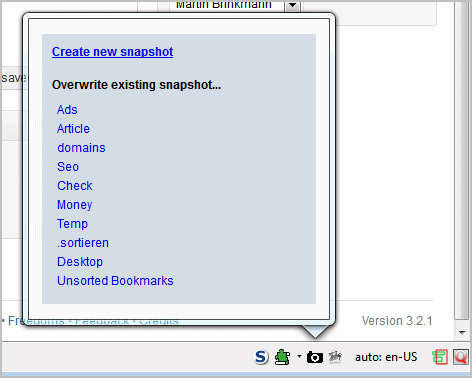 The Snapshot Gallery button offers to restore a previously saved set of tabs into a Panorama group. This did not work as advertised on the Firefox 7 Aurora test system here. While it was possible to restore all saved tabs in the browser immediately with a click on the Snapshot Gallery button and the selection of the snapshot, it did not display the group your tabs Panorama menu as shown on the Mozilla Labs website.

Snaporama's feature is not entirely new. Firefox users can use the shortcut Ctrl-Shift-D or a right-click on the tabbar and the selection of Bookmark All Tabs to add all open tabs to a specific bookmarks folder. A middle-click on that folder at a later time opens all the tabs at once.

There are also add-ons available to save and load browsing sessions.

The add-on only makes sense in conjunction with the Tab Groups feature.

Firefox users who would like to try the Snaporama add-on can download and install it from the official Mozilla Add-Ons repository.