I remember playing the first Boulder Dash game on the C-64 with a friend of mine. Players took control of a miner whose task it was to collect diamonds to open a level's exit to proceed to the next. The exit would only open if you had collected a set amount of diamonds, which got gradually more difficulty. There were two main obstacles for players to beat a level. First, they had to make sure to not block themselves or the exit with rocks. A restart was necessary if they did. And then they had to take into account the various creatures in the levels. You could cope with them either by blocking them with rocks or by destroying them with rocks. Some enemies left diamonds on the screen after their demise which were needed to reach the diamond limit to open the exit.

Rocks and Diamonds is a Boulder Dash clone for Windows, Linux and Macintosh computer systems. The game is not a 1:1 copy of the original Boulder Dash game, as it introduces new elements to the game. But first the basics. You control the miner with the cursor keys. Left Control is used to clear an adjacent field without moving into it, while Right Control to drop an element in inventory, like dynamite.

The game is highly configurable, all controls can be changed in the setup input menu. Here it is furthermore possible to change other settings, like in game music, resolution and quality. 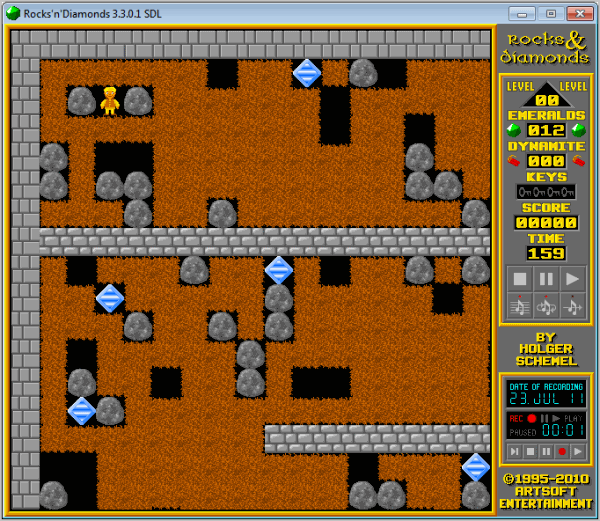 The game itself plays just like the original Boulder Dash. I have not tried the Sokoban and Emerald Mine levels and cannot really say how they play. The music has been taken directly from classic Amiga demoscene tunes, which is an incredible idea. If you have been part of the demoscene then you will surely love that idea.

Rocks And Diamonds comes with a level editor to create new levels. The editor is easy to use. You see the current level on the left side and can use controls on the right to add, edit or remove items from that level. You can place enemies, rocks or diamonds there for instance among other things. 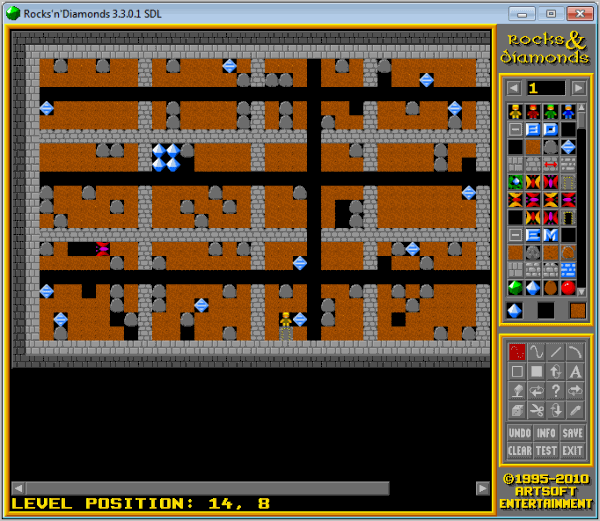 The game is well done and lots of fun. Especially the original Boulder Dash levels bring back memories. One thing that is not optimal is that there levels are not automatically switched. You always go back to the main menu where you have to click the start game button to play the next level.

Users who would like a dose of one of the most popular C-64 games of all time can download Rocks And Diamonds from the developer website.