Searching by image is a new feature of Google Search that was introduced yesterday as well. It basically allows the web user to upload an image to Google to search for it on Google. The search will be on all Google properties, including Google Search and Google images. A search like this can come in handy in multiple ways, from identifying people on a photo to finding out where that beautiful sunset was taken in the world to getting information about a painting that you have as your desktop background.

Lets start to look at how Google Search by image works, before we look at how good it actually is.

Search engine users can click on the icon to display a new search by image overlay. They can paste in an image url, or switch to the upload form to upload an image from their computer. It is alternatively possible to drag images from the desktop or a website to the search interface.

The search results page displays the uploaded image on top, and possible hits below that. 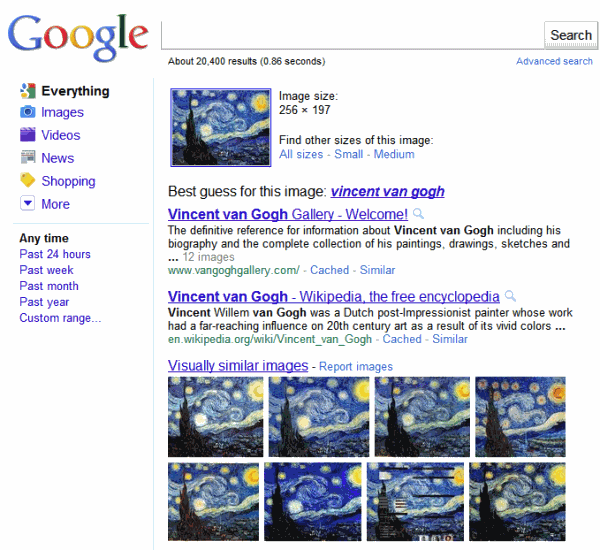 Google will display visually similar images on the page, as well as pages that contain the very same image, opening up new possibilities for owners of the image to find out which websites have copied it.

Lets run the new image search through a series of tests.

Google Search by image shines in this regard. Just upload a portrait photo to the search engine to get more information about the person on the photo. I have tested it with stars like Caroline Quentin, Karen Duffy or Sabina Gadecki, as well as people from the past like John Constable, Goethe or Shakespeare. Google was able to identify the people on the photos correctly even if the file name gave away no clues. Impressive. Results were not that good for lesser known locations, like the Calanque De Sugiton France which is one of the top Bing images today. The Blue Spring State Park in Florida was recognized correctly on the other hand.

Results were better when objects where shown in images. Most were identified correctly, like the Knight's Templar cross, the Samsung NX100 digital camera, company logos or the picture of a housefly. This opens up interesting possibilities, for instance to find out more about a laptop solely on an image that you have at your disposal, or about a new television that looks incredible.

I have not been impressed by most new features that Google rolled out in the past two years or so. Google Images by Search on the other hand is almost to good to be true. The recognition of objects, people and landmarks works very well. It opens up new search possibilities that have not been there in this form before. Especially the mix of search results, something that I have criticized in the past, works well for this type of search.

Why do not you try it out yourself and let me know how it works for you?