Those looking for tools to help them organize their technologically-enhanced lives have plenty of options. Windows users can turn to the expensive prospect of using OneNote, which revolutionized online image clipping and note organization for the PC. Others are quite fond of Evernote, which took many of the features that make OneNote so appealing and put them online for free. For quite some time these two options have been the focus of the worldâ€™s note-taking attention, but new contenders are quickly coming up that challenge their dominance in the field. Among them is Springpad, which over the past year has become the favorite of many computer users for general, everyday note organization.

This article will walk you through some of the features of Springpad that set it apart from Evernote and OneNote, so if you havenâ€™t already, you may want to jump over to Springpadâ€™s website and sign up.

The first time you log in you will see one of Springpadâ€™s most visually attractive features â€“ your ready-made home theme. Make a selection, upload a profile photo if you think you need one, and then click next. Springpad will walk you through its unique organization system, which centers on the usual notebooks but makes them available through a graphical interface that you may find friendlier than that of OneNote and Evernote.

Where Springpad takes a sharp turn away from its competition is when you add notes to your notebooks by â€œlooking things up.â€ For example, letâ€™s say that youâ€™ve just heard of a new album but donâ€™t have time to look into it right away. By clicking the plus sign near the top of the screen and selecting Look it up, you bring up a search field which will crawl select sites for more information. By typing in the album and selecting the Album tab, Springpad presents you with a list of possible matches for your search. Selecting one adds it to your general notebook, where you can now find information about not only where the album can be purchased and for how much, but also when it was released and where the artist has been touring lately. You can even â€œLikeâ€ the album to Facebook, straight from your Springpad. 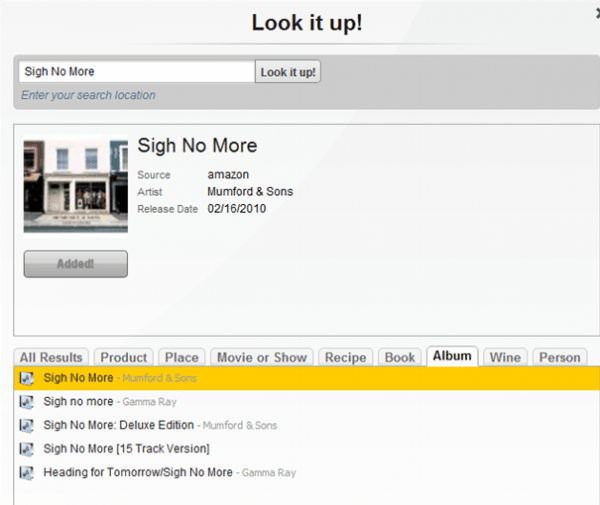 There are other quirks Springpad has that its competition does not. The checklist feature found in other note taking applications is streamlined in Springpad, and alerts can be set up to remind you to do things on the lists you create. You can sync your Google Calendar to your Springpad account, leaving the Google side of your calendar untouched but automatically providing additional information on Springpadâ€™s side.

In conclusion, it is easy to see that Springpad is different from Evernote and OneNote is some distinct ways. These differences will not be right for everyone by any stretch of the imagination. Students will probably still find OneNote the best choice available, and computer users who are just trying to keep track of the bulky information they pull from the internet will still probably prefer Evernote. Yet if you are looking to add more organization to your life, if you are less interested in the information you are getting and more interested in putting it into arrangements that are more meaningful to you, then you may find Springpad the best possible option.