The Windows operating system saves registration information to the PC it was properly registered on. The file is created whenever Windows is activated on a system. It contains hardware information, which means that it cannot be copied to a new computer to activate the computer directly. On the same computer however, a restoration will activate the system without running the activation procedure again.

This highlights one use for tools to backup and restore Windows activation information. Windows users who buy pre-build computers have another. They often get a pre-activated version of the operating system when they buy the PC from a major manufacturer. They can reinstall Windows on the computer without activation if they use the supplied media or recovery partition. This is however not always possible. To avoid hassles like having to call OEM support or Microsoft to sort out the issues, one could simply backup the activation information before the re-installation, and restore the information after the system has been installed from scratch on the same computer.

Two programs are available that can backup the required files and information.

ABR (Activation Backup and Restore), has been designed for Windows Vista. A beta version of the program for Windows 7 has been created by its developer. The program is fully portable but needs to be executed while Windows is running.

Run activation_backup.exe whenever you want to backup the information, and activation_restore.exe whenever you want to restore the information again on the system. The program does not appear to be working properly on 64-bit editions of Windows 7. While it was able to save the product key to the file, it failed to save the certificate to the program directory as well. 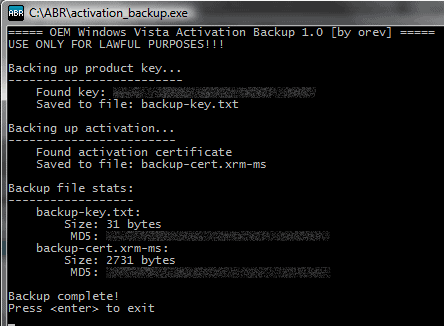 The second program has been designed specifically for Windows 7. 7Tokens Manager - The Activation Backup Solution is a free program that is compatible with all 32-bit and 64-bit editions of the Windows 7 operating system. 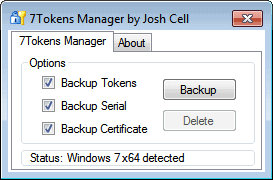 Just run the portable program after unpacking. It displays three options which are all pre-selected. It can backup tokens, the product key and the certificate. It will also display if the system is a 32-bit or 64-bit system in the interface.

A click on Backup saves the data in a backup folder in the program directory. To restore the data at a later time, run 7Tokens Manager on the newly installed system and select Restore instead of Backup there. This saves the files and information to the system so that Windows 7 turns into an activated system afterwards.

7Tokens Manager is the ideal program for Windows 7 users, while Vista users should use ABR instead. Both programs are portable and fit nicely on a removable drive.

Both programs have been scanned at Virustotal and both turned out to be clean. Well, 7Tokens Manager returned 0 of 42 which means that no virus engine has detected malicious data. ABR showed 1 out of 42 with the likelihood of a false positive.

7Tokens Manager can be downloaded from the MyDigitalLife forum, ABR from the developer website. (Inspiration taken from Caschy)