Apple’s Growing Up and Getting Big Boy Scareware

A couple of weeks ago word started spreading to Apple forums that there was malware installed on some systems. Discussion has continued to grow, and even security companies have reported that there is, indeed, a virus for macs in the wild. Seemingly the only company who is still denying the existence of the bug is Apple.

The malware spreads in a way similar to several that have recently been passed to Windows machines. It calls itself Mac Defender or Mac Security, and encourages a user to download it from a web page with an infected link or advertisement. It appears at a glance to be a legitimate piece of antivirus software. 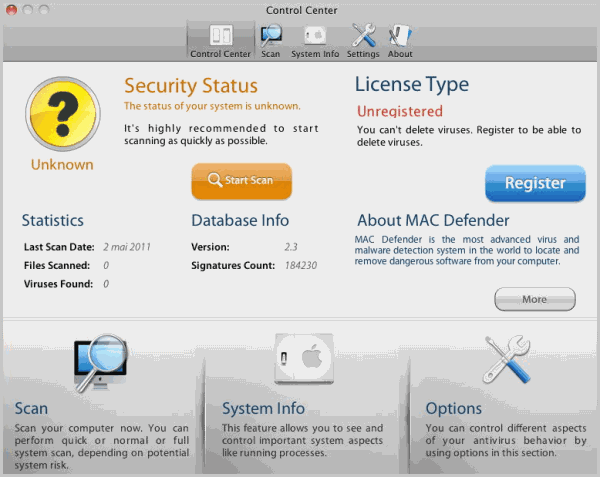 While security companies scramble for a fix, Apple refuses to comment on the situation, neither confirming nor denying the existence of the bug. In an internal document leaked to the internet, support staff were told not to admit to the bug at all, and not to help with uninstallation.

While this kind of malware is becoming downright common for windows, Apple is not used to dealing with this type of situation. There are very few Apple bugs. The reason is not, necessarily, that Apple is any more secure than Windows. It’s more likely that Apple has had a small, if loyal, market share up until now. Macs are becoming more popular, though. If there is safety in obscurity, then as Apple’s obscurity disappears, so does the safety factor.

Apple’s tendency towards secrecy will not serve it well here. Acknowledging the problem would give mac users peace of mind, and would let them know that a fix is coming. Being open with the public about security problems is, in general, smarter for a company than trying to hide them. Apple has not had to face this enough yet to get that point.

Any Apple fan will tell me how much better Macs are than PCs. Okay. Whether that’s true or not, though, you have to admit that as Apple becomes more popular, the company will have to face some of the problems that Windows has been facing for years. This is just one of the first. Yay, Apple, look at the positives. This is a good sign, right ...?

What are your thoughts? If you are on a mac, do you agree with the experts who still say that an antivirus program is not necessary for the Mac? Will you install one? How do you think Apple should handle this? In your opinion, are they on the right track?

Article Name
Apple’s Growing Up and Getting Big Boy Scareware
Description
A couple of weeks ago word started spreading to Apple forums that there was malware installed on some systems.
Author
Mike Halsey
Advertisement