The program's main task is to run a virus scan on a Windows system; an on-demand scanner that acts as a second-option scanner to find threats that resident antivirus solutions did not detect at all or improperly.

The core difference to conventional antivirus software is that it scans the PC but does not add protection to the operating system at the same time. 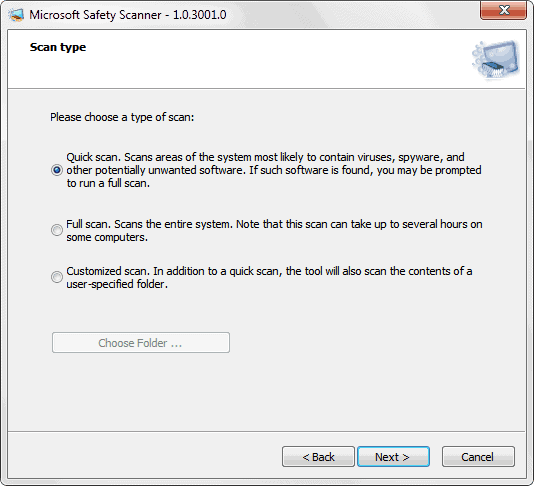 Most users will probably use the on-demand scanner to verify that the operating system is clean of viruses and other forms of malware. The major benefit of this approach is twofold:

First, that you may run Microsoft Safety Scanner next to any installed antivirus or security software on a PC running Microsoft's Windows operating system. The option to do so is obviously better than having to uninstall one antivirus program to run another, as there are often incompatibilities or problems involved when running multiple virus scanners on a system.

The second benefit is the ability to scan the system for malicious software without having to configure the program, or making sure that it is up to date. The software uses virus information from Microsoft's Malware Protection center.

Microsoft Safety Scanner has been designed with simplicity in mind. The program can be started right after downloading or transferring it to a Windows PC. Only the depths of the scan needs to be selected, everything else is handled automatically by the application.

You can run a quick scan, full scan or customized scan. A quick scan will check sensitive areas of the operating system for malicious code like viruses, spyware or computer worms.

A full scan on the other hand will scan every single file plus the memory and the Registry. A custom scan finally scans a user selected folder or drive.

There are a few things that you need to know before you download and run the application. 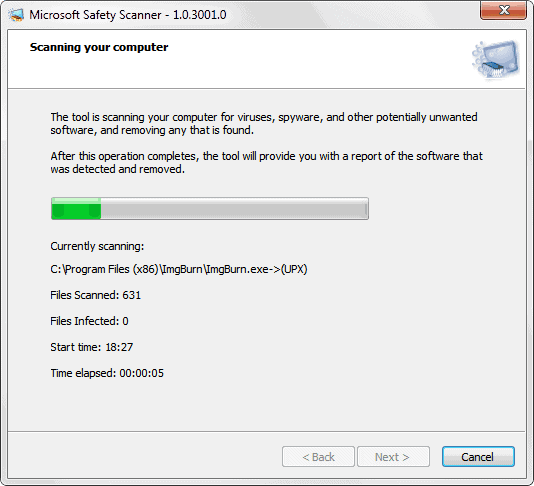 Microsoft Safety Scanner is an on-demand scanner, which means that it is no replacement for active virus protection on the system. It's aim is to provide additional means to scan a system, nothing more, nothing less.

The scanner has a size of about 110 Megabytes which includes all definition files. It is not auto-updating and will automatically expire after ten days. That's a serious restriction that makes the program more or less unsuitable for tech support purposes as it would have to be downloaded every ten days anew.

The program does not seem to require the Microsoft .NET Framework, nothing's mentioned about that on the system requirements page.

You can download Microsoft's Safety Scanner from the official website over on Microsoft's website and run it on the computer you downloaded it to, or on any other system you transfer the file to.

Microsoft Safety Scanner is a basic program to scan a computer software for threats. It is not needed if you run Microsoft security software such as Windows Defender, but if you prefer to run third-party security software, you may find it useful as a second opinion scanner.