How To Switch Firefox Update Channels

We have mentioned earlier that the Firefox development team had plans to switch to an accelerated development process. According to those plans, the development process would be divided into four stages that would on average take a new build in 18 weeks from its first appearance to release. Builds would be moved to new channels every six weeks starting with nightly builds, followed by aurora, then beta and finally the release build.

New features are first introduced in nightly builds and then passed along to the other builds during development. Nightly builds on the other hand are usually the least stable builds, and stability in general is improved when builds are moved to a new update channel.

Firefox users, like Chrome users, should have the option to subscribe to any of the available update channels. This has been on paper only until now. Recent nightly builds now allow the user to switch to another update channel.

This is achieved with an about:config parameter that is currently not available by default. Users who make use of the parameter see the following selection menu when they click on Help > About Firefox. 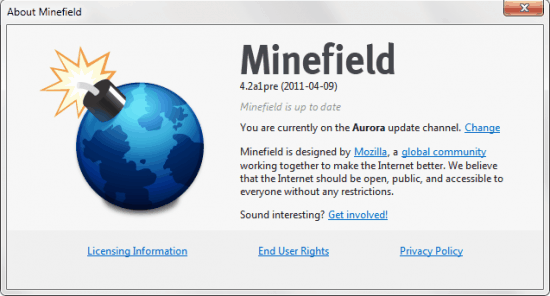 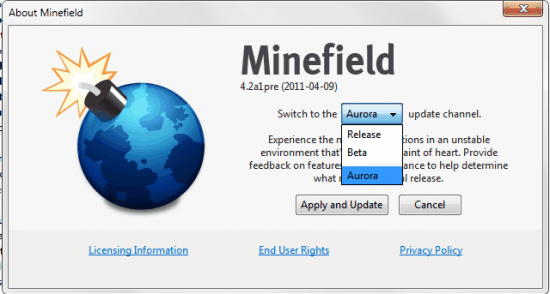 Here they can switch between the Aurora, Beta and Release update channels. The new parameter works only in the most recent nightly builds of Firefox. It is however likely that the developers will make the switch easier in future versions of the browser.

For now, this is what has to be done. Enter about:config in the address bar of the Firefox web browser. Right-click the parameter listing and select New > String from the options. Enter app.update.desiredChannel and give the new parameter the value release, beta or aurora.

Restart the browser afterwards and open the Help > About Firefox menu. You will now see the option to update the channel. Just select the channel you want to switch to and click on Apply and Update to switch to that update channel. You can at anytime switch back to the previous channel or another of the available channels.

There does not seem to be an option to switch back to the nightly channel though.