I have reviewed several video players in the past that use MPlayer as a core component. This includes my favorite video player SMPlayer but also KMPlayer (just received an update to version 3) or MPlayer WW. UMplayer is another MPlayer fork with some interesting new features that you won't find in the other players. I do not want to say to much but I'm pretty impressed by the video player.

Like all other mplayer forks UMPlayer is released for all mplayer supported operating systems, which means Mac, Windows and Linux. The Windows version comes as a web installer that requires an Internet connection to download the latest package from the developer website. I was not able to find an offline installer but it may be there somewhere on the website or forum.

Universal Multimedia Player supports the same range of input, video and audio formats as other mplayer forks. From playing audio CDs and DVD videos to streaming video and audio to popular audio and video fromats like avi, flv, mp3, mp4 or mkv: It is all there and integrated in the player. No need to download codecs or codec packages. 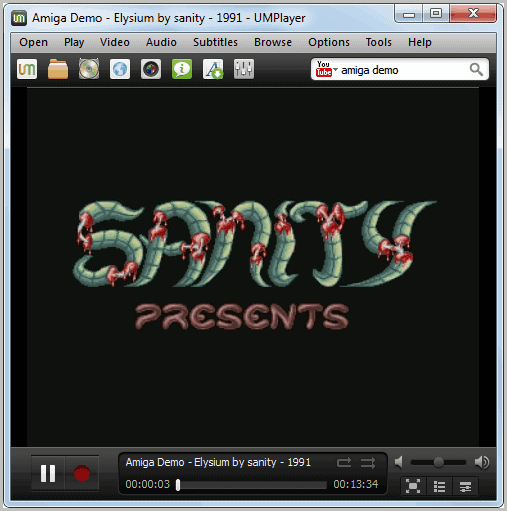 First time users will probably notice the toolbar at the top with an embedded Youtube search form. This links directly to one of the unique features of UMPlayer: Youtube integration.

You can use the search form or the separate Youtube search window to find, play and record Youtube videos right in the video player. 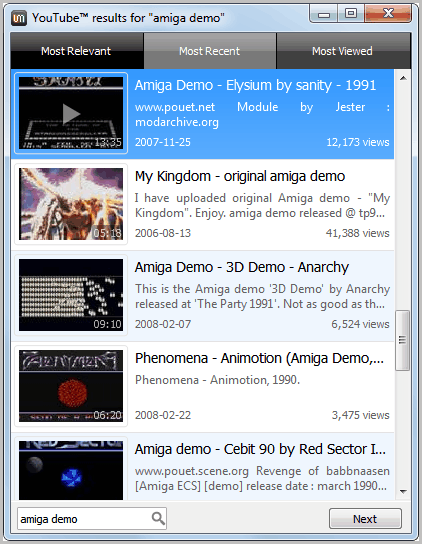 The search lists thumbnails, titles, descriptions, dates and views in a convenient listing. Filters are available to sort by most relevant to the search, most recent or most viewed. A double-click on any search result loads the video in the player.

The red recording button can capture the playing Youtube video so that it is saved to the local computer. The playback and recording quality of Youtube online videos is configurable in the settings (playback is set to the standard quality while recordings to 1080p).

Another interesting feature is the integration of the popular Shoutcast Internet radio service. Just press Ctrl-c or select Tools > Shoutcast to display a list of available stations. A double-click loads the station right in the player, a search is provided in case you do not find what you are looking for right away.

Other features worth mentioning are the built-in subtitle search, support for the majority of popular subtitle formats, audio delay adjustments , video thumbnail and screenshot maker, customizable hotkeys and advanced caching and cpu optimizations.

UMplayer has a lot to offer and it is definitely worth a closer look, especially if you like the integration of Shoutcast and Youtube in a desktop video player.