Solid State Drives (SSD) are faster, silent, more expensive and sometimes more complicated to maintain than conventional platter based hard drives. Especially the maintenance of the drive is a factor that may keep users away from purchasing a drive, or frustrated if they find out that their SSD does not support TRIM or garbage collection. Why is that bad? Because it means that the performance of the drive will drop over time.

The majority of SSDs that are currently sold support TRIM or can be upgraded to support it. But Trim is not supported on all operating systems. At the time of writing, only Windows 7 and Windows Server 2008 R2 support it on Windows. 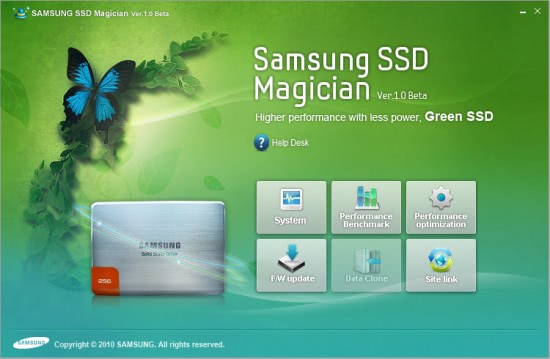 The utility detects connected Samsung drives automatically and blocks some of the program's functionality if no drive is detected.

Samsung's SSD Magician Tool is especially handy for users who run an operating system that does not support TRIM as it offers to maintain the drive to keep the performance of it near factory levels. The ability to run the garbage collection regularly means that it is possible to automate the process.

The feature set is different in some aspects to comparable tools like Intel's SSD Toolbox. Intel's application supports operating system tweaks to optimize the system for SSD usage. Samsung's software on the other hand offers a performance benchmark that Intel's tool does not offer.

Third party tools, like the excellent SSD Drive Tweaker can be helpful to overcome those limitations. (via)