3D is the next big thing on computers, certainly for gaming and it will be interesting to see how it translates to the desktop.Â  Those clever people at ExoPC will be shipping a 3D version of their Windows 7 tablet later this year with a special UI to take advantage of it.

The hardware manufacturers have clearly taken notice and a leaked slide from nVidia shows that the company is prepping a 3D version of it's Tegra 2 graphics processor for later this spring. 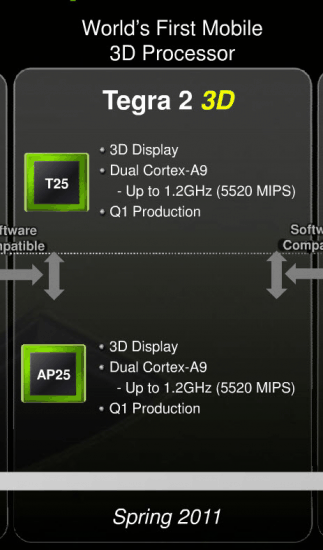 The leaked slide was obtained by TechEye and shows a 1.2GHz Dual cortex A9 processor and this is aexactly the type of technology that can bring 3D direct to tablets and smartphones long before it hits a critical mass on PCs and Macs.

Small tablets, aimed specifically at gaming would benefit greatly from 3D, essentially making them more saleable, and we could also expect companies such as Nintendo and Sony to be very interested in such technology for their next generation handheld consoles.