The beta version is currently exclusively available on the official IObit forum and on select third party download sites. Users who are interested in the application should realize that it is still a beta product, meaning that the software can cause problems on some systems or configurations. I did not experience any problems except for the occasional program termination during tests. The program itself seems well designed on the other hand and it seems unlikely that it will have critical negative impacts on computer systems. The application interface looks well designed. 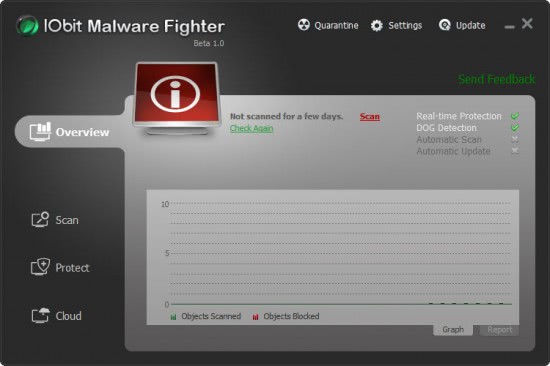 Guard can be activated and deactivated manually depending on the system configuration and needs of the user. No guard functionality information are provided in the application or on the website at this point in time. It is likely that IObit will either implement an on-screen help, help file or other form of guide for users of the software in the final release.

Three types of scans are available; Smart Scan will scan critical operating system files, processes and locations. The full scan scans everything and the custom scan gives the user the option to select the items that should be scanned by IObit Malware Fighter.

Users should take a look at the program settings for additional configuration options. Here it is possible to configure a higher protection level, the scan priority and other scan related settings or if DOG, the digital original gene heuristic malware detection algorithm should be used in addition to signature based threat detections.

IObit Malware Fighter makes use of the cloud to analyze risks. The service utilizes IObit Cloud which is also accessible directly in the web browser.

It is to early to tell how IObit Malware Fighter compares to other anti-malware applications like Microsoft Security Essentials. Interested users can download the latest beta version from the official IObit forum.

Update: Please note that the program has been released as a final version and that it is no longer free. The program is now called IObit Malware Fighter PRO which is available for $19.95 per year on the IObit website.+

IObit seems to market it as a complimentary product to resident antivirus software. The basic functionality of the program has not changed since the initial beta release-