I recently bought a new shiny NVIDIA 470 GTX for my main computer system. Since this was the first purchase in nearly two years I had to do some research to find the best card for me. And that meant a video card that would be almost silent in 2D mode but powerful enough so that I can play games that I want to play. I finally decided to buy the Zotac 470 GTX AMP version which got rave reviews about its speed and working noise, or more precisely the lack thereof.

I did not have any troubles adding the video card to my PC but noticed right away that the fan speed in 2D mode was everything but silent. The noise was there and it was irritating from minute one on. Maybe it is because I'm very noise sensitive, or because my PC has been designed with less-noise in mind. Still, the noise of the Geforce 470 video card was a problem that I had to cope with.

I first tried running Rivatuner to set the fan speed but that was not working as it did not change a thing. Next up was Nvidia's own NTune which has a switch to change the 3D GPU speed only. Changing the slider did seem to have an effect on the fan speed but it was not quiet enough to satisfy me.

Then I remembered the MSI Afterburner software which I had reviewed some time ago here at Ghacks. Lo and behold, the tool worked extremely well and I was able to change the fan speed according to my needs. 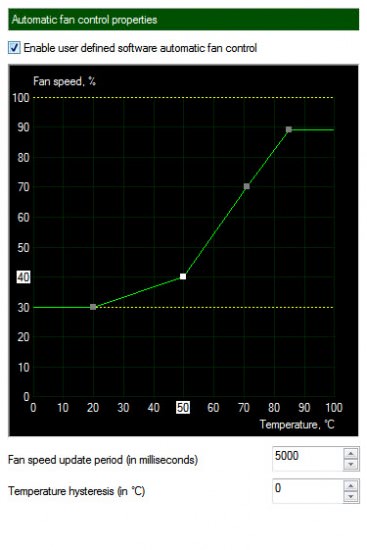 I have created a custom fan profile that automatically adjusts the fan speed to the gpu temperature. If the temps rise the fans will run faster, if it drops they run lower. This ensured that the fan speeds did not create to much noise in 2D mode but enough to keep the video card cool in 3D mode. NVIDIA users with the same problem can download MSI Afterburner from the MSI website. The tool works with many NVIDIA video cards, not just those from MSI.