IE9 Scrubs up well against the HTML5 Competition

Microsoft has for years been accused of being shy about standard's compliance.Â  For many years they said they could do the web better and, for many years the web went along with it.

Recently though the company has taken a more pragmatic approach and has moved, slowly admittedly, towards full standards compliance.Â  With their next browser, Internet Explorer 9, they've said it will be fully compliant and recent tests from the W3C organisation certainly bear this out. 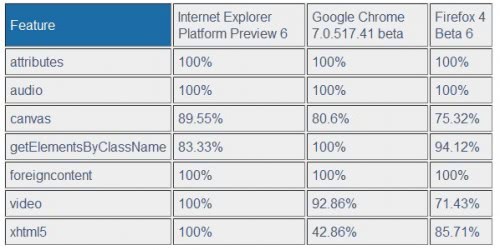 The figures, reported today by Engadget, put IE9 slightly ahead of the next best browsers for full compliance with the new web standard.Â  Admittedly the top three browsers are all betas and so we can expect these figures to move, sharply and quickly, but for now it's an excellent sign.

Internet Explorer has lost significant market share in recent years after the cataclysmic calamity that was IE6 (I try and find stronger and more colourful adjectives every time I mention the god-awful thing).Â  Now Microsoft are desperate to grab some market share back and, by all accounts, IE9 could do it through a combination of complete standards compliance and new features that people actually want and will use.

We'll keep you informed about how this picture changes at gHacks.Â  The new HTML5 browsers are all due out in 2011 and it will be a very interesting year indeed for the web that we've all come to know and love.