We all know that it is not a good idea to run multiple real-time antivirus scanners side by side on a system. Most antivirus are actually scanning the system for existing programs before the installation can be completed. The two major problems with running multiple antivirus solutions on a system are performance issues and possible conflicts.

But what about on-demand virus scanners? Avert, which stands for Automatic Virus Eradication & Removal Tool, is a free program intended to be used on already infected systems, or systems that a user wants to scan with multiple antivirus engines to be sure that no virus, trojan, worm or other malicious program is found on it.

Avert can scan the computer system with eight different antivirus engines. By default, it will only download and run VIPRE. A click on the Tools and Settings button in the lower left corner displays the options where scanners from A-Squared, ClamWin, Trend Micro, Sophos, Panda, Avira and VBA32 can be selected. A click on Download loads the programs to the directory of Avert, and makes them automatically available for future scans.

Everything is kept portable, so that it is possible to move Avert and all downloaded antivirus scanners to another drive or computer. 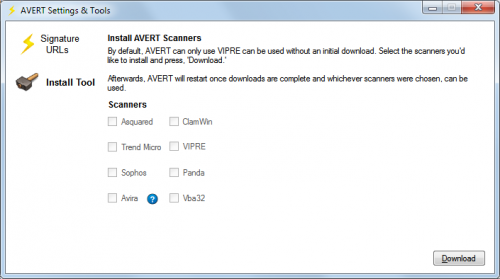 The program directory with all antivirus tools included has a size of 313 Megabytes, less if only some of the virus scanners are downloaded. 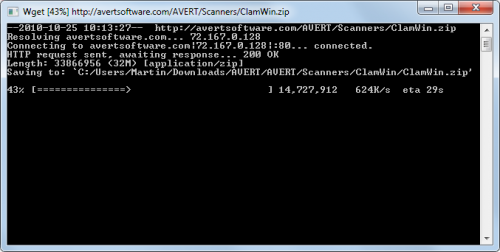 In addition, Avert offers to run CCleaner and a set of three tools on the system. With CCleaner it is possible to remove temporary files to free up disk space. The three tools are available to backup the Windows Registry and reset the Windows Hosts file and proxy settings.

The depth of the scans and utilization of the included tools can be configured in the program's main interface.

The virus scans can be configured before the start. Avert offers to run a full system scan, balanced, quick or custom scan. CCleaner can only be run in thorough mode if enabled, and the three tools can be enabled individually.

The individual programs may download the latest antivirus signatures if updates are available. These signatures do not seem to be saved locally, which means they need to be download every time the program is run. Vipre needs to be downloaded every time as well, because the developer does not offer an option to download the signature file separately. Avert runs all selected programs consecutively afterwards.

Avert is a free portable software for Windows. The program requires the Microsoft .net Framework 2.0. (via)