It was a great idea that was sadly let down by poor implementation and poor support.Â  Games for Windows, which was launched with Windows Vista, was intended to be the marker by which consumers would know any games they bought would work happily on their Microsoft Windows computer.

The seal of approval, that was carried in a banner across the top of boxes for games that participated in the program, was intended to convey that the game had been tested by Microsoft and would work happily, but also that it would integrate with the Games Explorer in Windows Vista and Windows 7.Â  Here it could be launched easily and the games explorer could also handle extras for you such as parental controls, patches and updates.

Sadly it was let down by poor support from the games industry, but today Microsoft are relaunching the brand, as reported by CNet, and wants gamers to know that Microsoft is serious about PC gaming.

A new Games for Windows Marketplace will allow people to buy games via download from the Internet.Â  There are about 100 games available so far but Microsoft is very keen to turn Games for Windows into a full-on gaming app store.

The store will also integrate with the Xbox and Zune stores and allow gamers to use points they have collected in the new store to purchase content.Â  People can also pay by credit and debit card if they so wish.

Update: The new Games for Windows Marketplace is now available on the Xbox website. 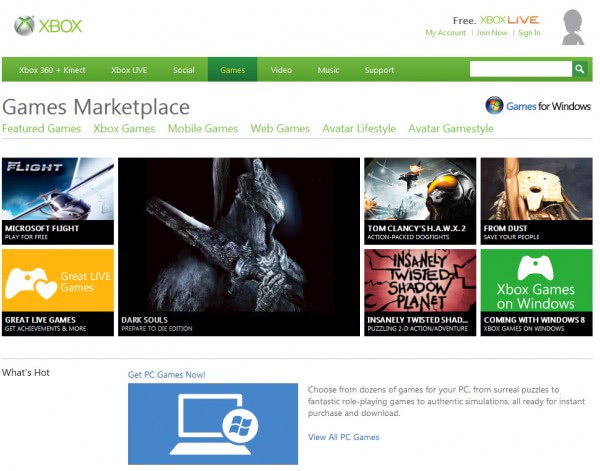