Recently I did an introductory "walk around" GNOME (see "A walk around the GNOME desktop") which offered the new users to Linux a look from the ground level at one of the most popular of the Linux desktops. This time around, I will do the same service to the KDE desktop. I will focus on KDE 4.5 (since that is the most recent release) with the goal of showing you just how user-friendly KDE makes the Linux desktop.

Interestingly enough, there has always been speculation about what "KDE" stood for. Quite some time ago (circa 2000) I spoke with one of the lead KDE developers who informed me that "KDE" stood for "KDE Desktop Environment". Linux always loves its recursive acronyms. 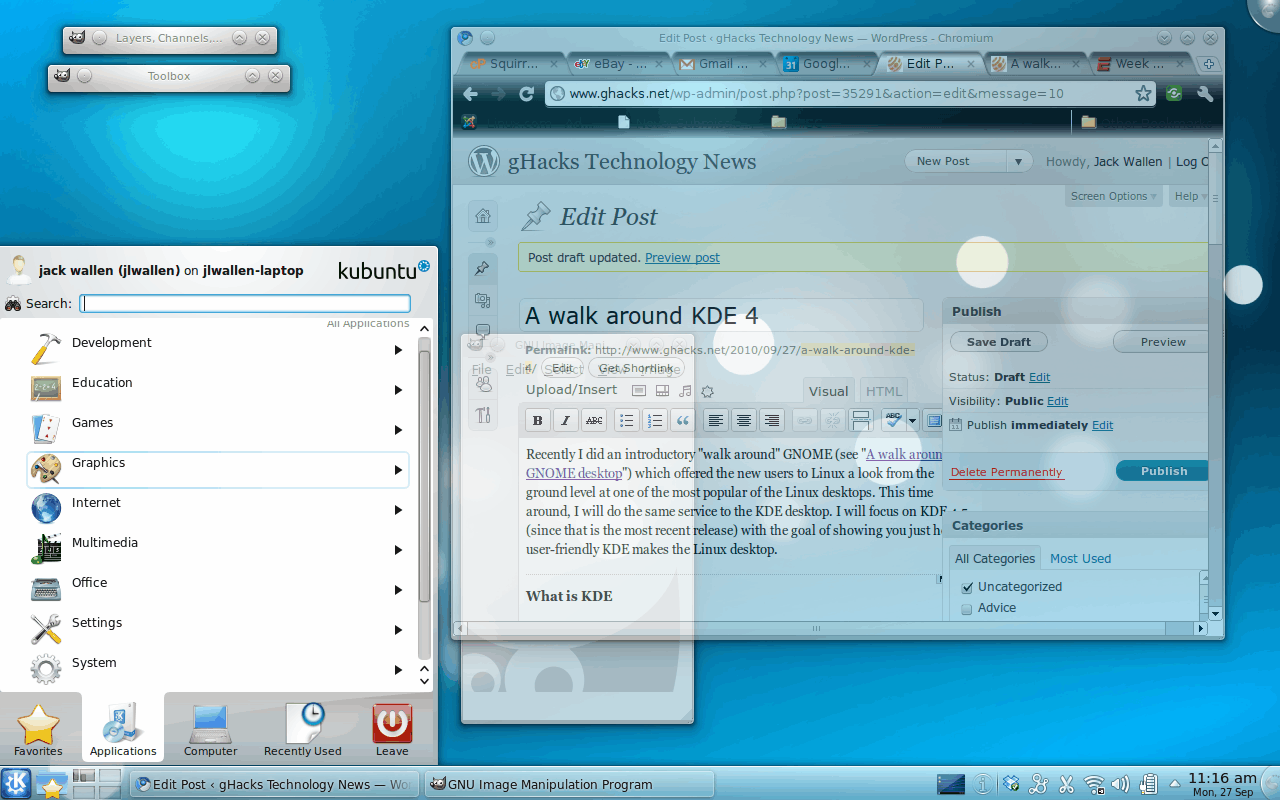 KDE is a complete desktop environment which means nearly all of the bundled components are fully aware of one another.

Originally (up to the KDE 3.5 release) KDE was a very standard desktop with a taskbar, start menu, desktop icons, etc. When 4.0 was released KDE was completely rebuilt. Although it still contains the standard items, KDE 4 now offers many other features that might be considered more advanced. To take a look at these features, see the KDE 4.5 content here on Ghacks.net. Let's now take a look at the different pieces that make up the basic KDE 4.5 desktop.

You can add items to the Panel but, unlike GNOME, you are limited to only adding application launchers.

KDE has but one menu on the panel - the "K" menu. From this menu you can launch applications, add applications to favorites, open up the system settings or open your file manager (Dolphin) to various locations (such as Home, Network, Root, or Trash).

You will also find a desktop menu when you right-click anywhere on the desktop. This menu allows you to do the following:

You will notice, missing from the above menu is the ability to create new items such as Launchers and files. These have been replaced by widgets.

As I mentioned in the GNOME article, I am not speaking of Microsoft Windows. Very much like GNOME, you will notice your applications nicely housed within windows that look very much like anything you have ever used in any other environment. At the top right you will see three buttons for Minimizing, Maximizing, and Closing your windows. You will also notice a button in the top left corner (not the application icon) that allows you to pin that window to all workspaces. Typically, when you open up an application on a Linux workspace, that application is only visible to the workspace it was opened in. If you click this button that application will then be visible on all workspaces.

If you know the command you want to run, but do not know where to find the launcher within the menu, you can always open up the run dialog (see Figure 2) and enter your command there. To open the Run Dialog click the Alt-F2 keys together. Type your command and hit Enter and the command will run.

Just like GNOME, KDE has a control center. This control center (see Figure 3) is a one-stop-shop for all of your KDE configuration needs. To open up this tool click Start > Computer > System Settings. From here you just need to click whatever it is you need to configure.

An odd little name for a very useful tool. In the upper right corner of your screen there is a small icon, commonly referred to the "Cashew". When you click on this icon the rest of your screen will fade out and a menu will appear. On this menu you can:

You may wonder why the "Lock Widgets" entry. This is simple. If you want to make sure your current state of widgets (as well as the panel) are not accidentally changed. If your widgets are locked you have to unlock them in order to make any changes.

There are a number of topics that were mentioned in this article that you should take the opportunity to further read up on. One in particular is Desktop Activities. Once you feel comfortable using the KDE desktop, you should definitely learn how to take advantage of this outstanding feature.