Imagine my surprise when Jojo mentioned that Comodo DNS was blocking ghacks.net, allegedly because it was a hacking / warez site that may offer illegal sharing of copyrighted software and media. Bogus claims obviously, which can hurt a website financially and irritate new and regular visitors.

I tried to get hold of Comodo to resolve the issue. First, I checked their forums to see if it was a general problem. Then, I looked under contact and found their support system. I created a support ticked and waited a good hour or so. After that I received an response, stating that "This site is parked, and doesn't carry any useful content. The only content it has is advertisement links. Comodo Secure DNS blocks such sites".

No mentioning of hacking or warez in the reply. Now Ghacks.net is a parked domain with nothing but advertisements. Great, I wonder what domain they did take a look at, definitely not mine as it is not a parked domain obviously. You would not be reading this otherwise. 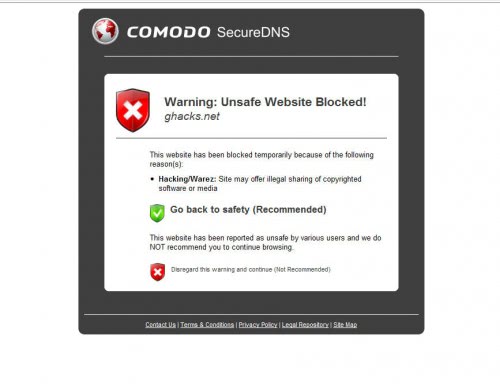 So, I replied and after 12 hours, I'm still waiting for a response. To be honest, I have no idea how they can classify my site like this. I have a nagging feeling that some ******* webmasters or ****** of users have reported the site.

Brett notified me about the blocking of ghacks as well in an email. He mentioned that Comodo started blocking a large number of sites since yesterday, and believed that it was probably because of the name of the site.

Are you a webmaster with similar problems? Or a user who noticed that other sites are not accessible as well? Share your findings in the comments.

Update: My third email to [email protected] was answered quickly, and Ghacks does not seem to be blocked anymore by Comodo.