You've probably seen the advertisements for Windows 7 and the tiling windows feature. Believe it or not the very first tiling window manager was Siemens's RTL (created in 1988). After that came a UNIX version called tAP (The Andrew Project) for the X Windowing System. Fast-forward to now and Microsoft claims to have innovated a new feature. Soon after that KDE refines the same feature and ads it into 4.4. Of course 4.4 was still suffering from numerous bugs. Fast-forward a little bit further into now and you have 4.5 which squashes tons of bugs and offers an amazing desktop that includes a bug-free tiling experience!

And in this article I am going to show you how to enable and use tiling feature in KDE 4.5. After that, it's up to you to decide if this feature helps to make your work more or less efficient. 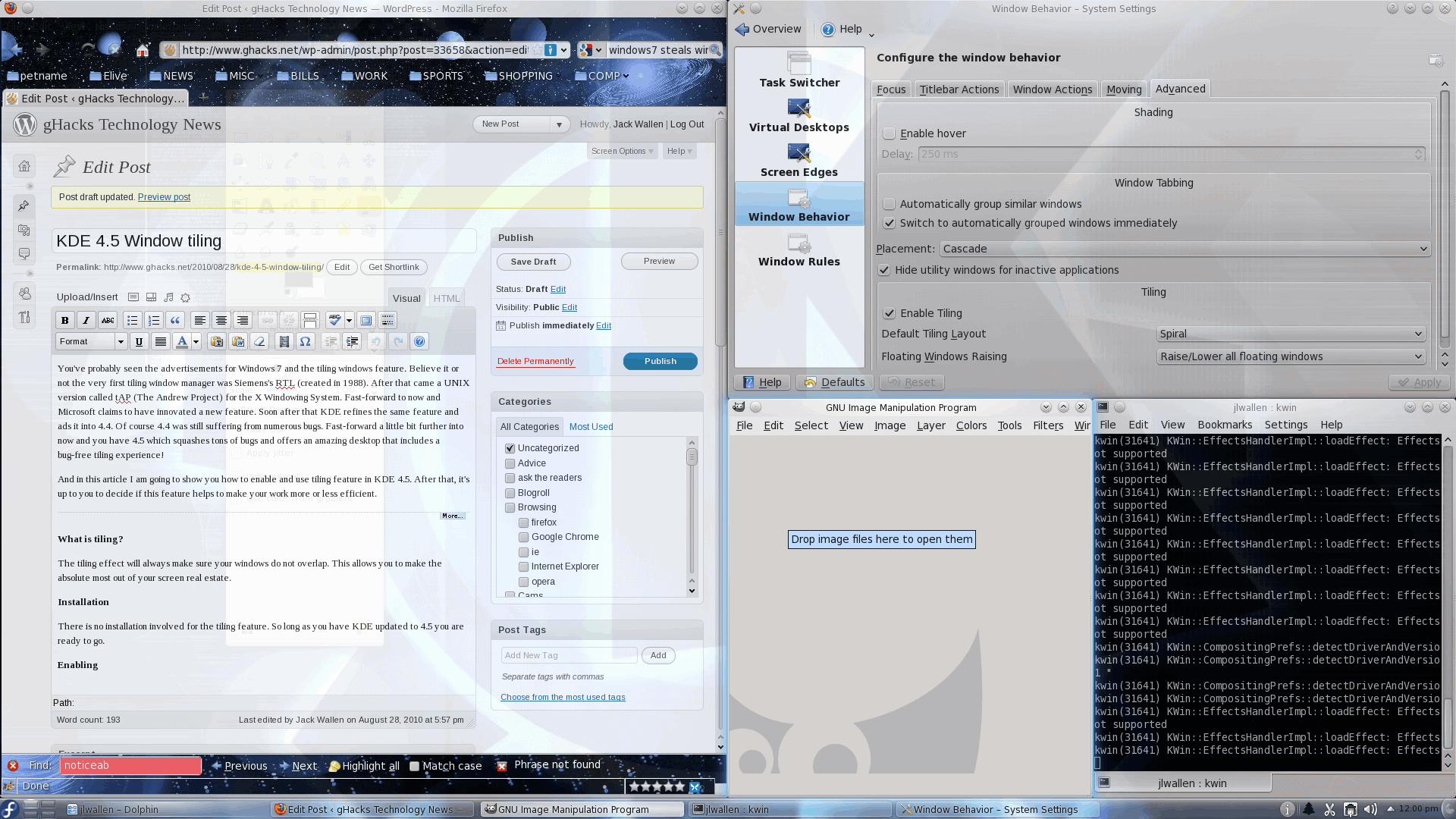 The tiling effect will always make sure your windows do not overlap. This allows you to make the absolute most out of your screen real estate. This also allows you to move windows around and always have them take up remaining free space on a desktop. Tiling can take some time to get used to, but once you do, you will come to depend upon it to make your PC use as efficient as possible. Figure 1 shows a sample of how tiling works on the desktop.

There is no installation involved for the tiling feature. So long as you have KDE updated to 4.5 you are ready to go. NOTE: You can not have Emerald or Compiz enabled for this to work. If you want effects and tiling you will have to use KDE's built-in effects.

You will notice a drop down for the tiling layout. You have three possible options:

Columns: This will always layout your windows in columns. If there is no room on your desktop, the windows horizontal size will be resized to allow the addition of another column on the desktop.

Spiral: This will add new windows in a spiral fashion. This is one of the easier methods to use, however, the more windows you have open the smaller the new windows will become.

Floating: This is more free form and will probably suit a larger portion of people. This does not hold true to any hard and fast rules - it just places windows in the free space you have available.

You might be thinking that tiling can really be a problem when you need a window to be specific size all of the time. When you move windows around on a tiled desktop they are constantly changing sizes. To get around that, KDE has Floating Windows. A floating window is just that - not locked to any given position or size. To float a window right-click its title bar and select Float Window. You can now move that window anywhere you like (and it will retain its size). A floated window will overlap other windows (see Figure 2).

Window tiling is something to get used to. It can be a bit frustrating at first, but once you get used to it, it will keep your desktop from getting out of control.

Jack has been a technical writer, covering Linux and open source, for nearly ten years. He began as an editor in chief of Linux content with Techrepublic and is now a freelance writer for numerous sites. Jack is also a writer of novels and is currently working on his first zombie fiction!
View all posts by Jack Wallen →
Previous Post: « Kontact: How does it compare to the competition?
Next Post: PCMan File Manager: Another light weight file manager »