Use A Ram Disk To Reduce Writes On Solid State Drives

The write speed of Solid State Drives is usually lower than the read speed. Write operations on slow SSDs can slow down the system performance and reduce the longevity of the drive; this was especially the case for first and second generation Solid State Drives.

Specialized programs such as SSD Drive Tweaker or Flash Fire aid the user in optimizing the system for Solid State Drives.

We have also covered tips to optimize Windows for Solid State Drives in the past which suggested among other things to move caches from the SSD to another drive.

That tip was problematic, especially for users who used SSDs exclusively on the device.

A workaround for those users is to use a ram disk for caching purposes. Ram disks, sometimes also called ram drives, are storage devices that use computer memory to store the data.

This is obviously only a feasible alternative if the PC has enough system memory that can be spared for the ram disk. Any PC with three or more Gigabytes of computer memory should be able to run a ram disk for caching purposes.

This article covers the creation of the ram disk and explains how to move the cache from the SSD to the ram disk.

Windows users can select from a variety of Ramdisk applications. We have covered Ramdisk.sys in the past for instance but will use the Dataram Ramdisk software this time.

Update: The company has reduced the maximum from 4 Gigabyte to 1 Gigabyte. While that is still sufficient for many tasks, we suggest you try Ramdisk.sys or the last freeware version of Softperfect Ramdisk instead which you can download with a click on the following link: ramdisk_348setup.zip The creation process is similar to that of Dataram RAMDIsk. END

The free version of Dataram RAMDisk supports ramdisk up to a size of 1 Gigabytes. This is sufficient for moving the cache to the ram disk and for some other uses as well.

Start the Dataram RAMDisk Configuration Utility after installation. The tool is listed in the Dataram Ramdisk start menu entry.

The ram disk is configured in the Settings tab. The size, file system and boot sector settings can be defined in here. How much memory should you turn into a ram disk? That depends on the memory installed and the required size of the caching directories. If the PC has 4 Gigabytes of RAM, you could set the RAM disk to 512 Megabyte for instance, and adjust it in one direction or the other if required.

One option to find out how much of the memory can be used is to open the Windows Task Manager by pressing Ctrl-Shift-Esc, switch to the performance tab and look at the physical memory section. Using half of the ram under the available section is usually a safe bet.

The file system can either be Fat16 or Fat32. Users who prefer NTFS or another file system need to select unformatted and format the disk in Windows after it has been created.

A click on Start RAMDisk will create the disk and assign a free drive letter to it.

The f: drive in the screenshot above is the newly created ram disk.

The second step of the process is to configure the applications and operating system to make use of the ram disk by changing the cache directories to a location on the new ramdrive.

We give examples for the Windows temporary file folders, Firefox and Internet Explorer caches.

The Windows temp directories are stored in the system's environment variables. The easiest way to open the configuration window is by pressing Windows-Pause on the keyboard and selecting Advanced System Settings from the sidebar of the window that opens.

Locate the Advanced tab in System Properties and click on Environmental Variables. Here we have user variables and system variables.

Candidates here are for instance the TEMP and TMP system and user variables. They can be edited by selecting each one of them and clicking on Edit. Simply enter the new path in the variable value field and leave the variable name as it is.

you need to create a new preference in Firefox for this to work:

Click on Settings next to browsing history in the General tab and on Move Folder in the next window to move the temporary Internet Files folder to the ram disk.

There is another benefit of using a ram disk for caching locations. The ram disk will automatically be cleared on shutdown which makes recovery of those caching files afterwards impossible (unless a snapsnot of the ram is taken shortly after shutdown).

Solid State Drives benefit from the reduced write operations and it might even speed up some operations marginally. 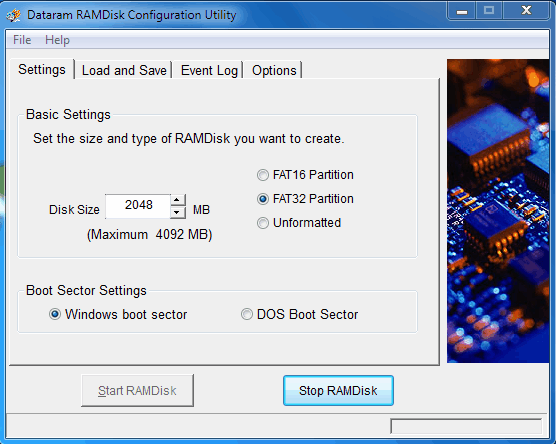 Article Name
Use A Ram Disk To Reduce Writes On Solid State Drives
Description
The guide explains how you can use a RAM disk on your system to speed up operations and reduce writes on your Solid State Drives.
Author
Martin Brinkmann
Publisher
Ghacks Technology News
Logo

Martin Brinkmann is a journalist from Germany who founded Ghacks Technology News Back in 2005. He is passionate about all things tech and knows the Internet and computers like the back of his hand. You can follow Martin on Facebook or Twitter
View all posts by Martin Brinkmann →
Previous Post: « How To Improve Uninstall A Program In Windows
Next Post: Wipe your drives securely with a hidden Windows 7 tool »