Many computer users have moved away from Adobe Reader to other pdf readers due to an increase in security issues over the last two years. Adobe Reader has become one of the prime targets of malicious attacks. The main advantage of third party pdf readers is not only that they are usually not affected by those vulnerabilities but also a faster pdf loading time and performance.

Popular third party readers are Foxit Reader or Sumatra. Nitro PDF Reader, which was released recently as a beta version, is a likely candidate to be added to that list as well.

Nitro PDF Reader is a free pdf reader for Windows that comes with all the traits one would expect from a pdf reader. It starts up considerably faster than Adobe Reader making it ideal for users who want to quickly view a pdf document. 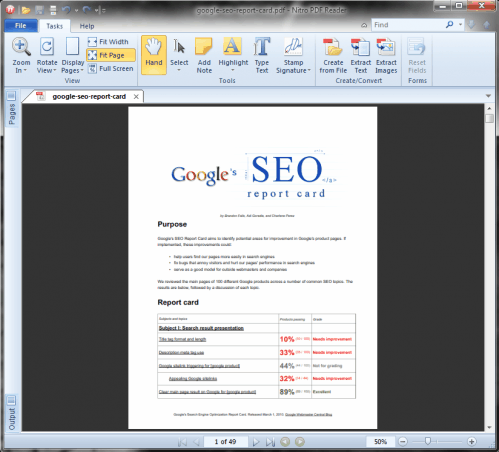 That alone would probably convince only a few users to give the program a try. The options in the program, especially the editing and saving options, might however make a difference.

Some of the features offered by Nitro PDF Reader:

The interface of Nitro PDF Readers will instantly look and feel familiar to Microsoft Office users. All options are located in the header from where they can be accessed easily.

Edited and created pdf documents can be saved as pdf files that are fully compatible with other pdf readers.

Nitro PDF Reader is available as a beta version for 32-bit and 64-bit editions of Microsoft Windows operating systems. The pdf reader is an excellent alternative to Foxit Reader.

Update: Nitro PDF Reader 2.0 has been released, check out our updated review here.

Update 2: The developers have released version 2.3 of Nitro PDF reader.