The Windows hosts file is used to map hostnames to IP addresses forcing the computer to use that mapping instead of the one provided by the DNS server. This can be useful in several situations like speeding up Internet surfing or making sure that a website is working fine after moving it to another Internet server before the new IP has propagated.

The Windows hosts file is basically a text document that lists IP addresses on the left and hostnames on the right. The hosts file is located in system32/drivers/etc/ of the Windows folder. It can be edited with any text editor. 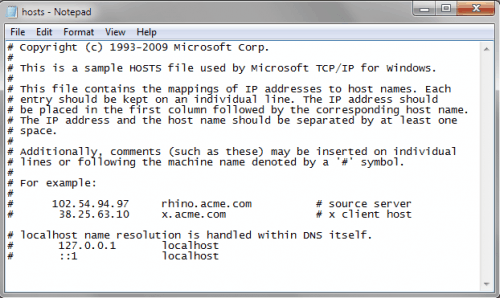 Optimizing the hosts file can speed up the parsing of the file and keep the DNS client service enabled while using a big hosts file.

The hosts optimizer will automatically remove duplicate host names from the hosts file, remove all comments including entries that have been made a comment to disable them and put a maximum of nine host names in a single line if they point to the same IP address.

The program will automatically created a backup of the hosts file before optimizing it. It has to be noted that the DNS cache needs to be flushed whenever a change is made to the Windows hosts file if the DNS Client service is enabled.

Hosts Optimizer can be downloaded from the abelhadigital forum. The program is also part of the hosts manager HostsMan.