What once was Mozilla Weave Sync is now Firefox Sync. Mozilla changed the name of the synchronization service for the Firefox web browser.

No word is out why they changed the name but it is likely that Mozilla Weave Sync was just not descriptive enough whereas Firefox Sync exactly describes what theÂ  service is all about.

Note: Firefox Sync has been integrated natively in the Firefox web browser. Mozilla launched it as an add-on initially, but it is now available without extra installation of any kind.

The process of setting up Sync is straightforward:

You can modify the sync data on any device individually; if you don't require some data on a device, simply uncheck the option on the Sync preferences page to disable it.

You can enable two-factor authentication for the Firefox account to add another layer of protection to it.

Note that you can manage your Firefox account online as well. You can use the online dashboard to delete the account entirely or disconnect some of the devices that sync data with the account.

You may find the following resources useful when it comes to Firefox Sync:

A new version of Firefox Sync was released as well (Firefox Sync 1.3b5) which offers considerable advantages over earlier versions.

The full list of changes is listed in the release notes.

Take a look at the screenshots below to see how easy it is to configure Firefox Sync to backup browser data that can be restored and synced with other devices. Data can be stored on Mozilla servers or custom servers. 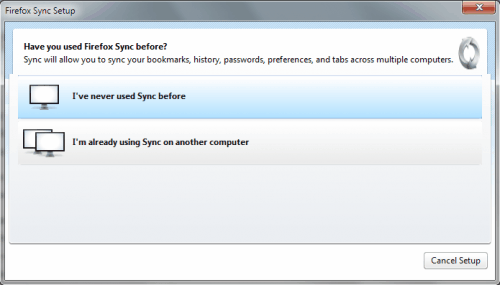 The Firefox Sync server (Mozilla or custom), username, password and email address need to be configured in the Sync account creation window. 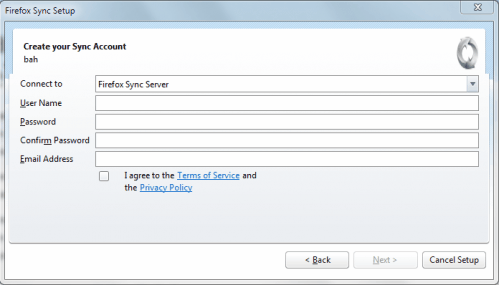 A secret phrase needs to be entered which will be used to encrypt and decrypt the data.

The data that should be synced can be selected in the next wizard window. It is possible to sync everything or only specific data sets. 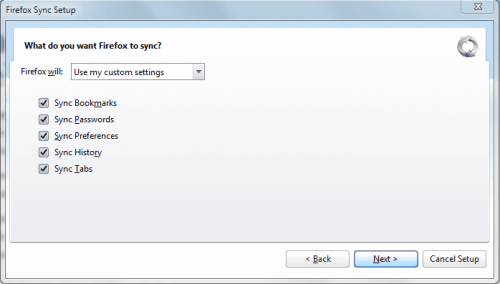 A captcha appears on the screen afterwards which feels a bit strange. The setup completes afterwards and Firefox Sync will appear in the status bar of the web browser indicating that it is performing the initial syncing of data to the selected servers.

Update: Mozilla has integrated Firefox Sync into recent versions of the Firefox web browser. Users can now configure data synchronization in Firefox with a click on Tools > Options in the Firefox menu, and the selection of the Sync tab in the Options window.

It is necessary to create an account before data can be synchronized between different versions of the Firefox web browser. Once setup, it is possible to sync data such as bookmarks, passwords and soon add-ons with Firefox running on other devices.