P2P networks thrive if they have enough users who contribute to the distribution system. They would not be working if anyone would simply download but not upload files or partially files to other users.

But there are situations where a user does not want to contribute the upload speed to spreading the shared files to other users of the network.

It does that by blocking file uploads in the supported P2P programs but only after the files have been downloaded. 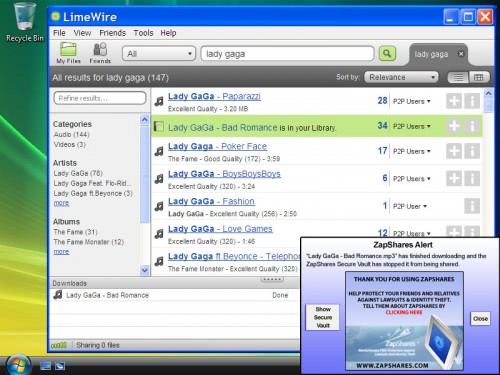 This works well in P2P clients where the user does not upload the bits received while downloading the rest. Zapshares will spring into action once the download of a file has been completed. It will automatically move the file into another location so that it is not offered and shared by the user.

The program will scan the computer system for shared files on the first startup to block those from being shared as well. The software runs minimized in the system tray after this initial configuration wizard.

Zapshares is definitely not the holy grail that protects users from sharing files in P2P networks. We already mentioned that users are uploaders in many P2P networks for as long as they download the files. It should also be noted that Zapshares did not detect the uTorrent installation on our test system.

It is also bothersome that there is no option to close Zapshares once it runs in the system tray.

Users who want to give Zapshares a try can download it from the developer's website. The software program is compatible with most Microsoft operating systems. (via ILoveFreeSoftware)