The second preview of Internet Explorer 9 continues to show JavaScript speed improvements over previous versions closing the gap between IE9 and Safari, Chrome and Opera and surpassing the Firefox web browser. 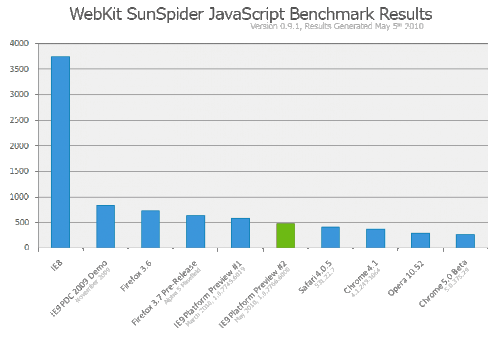 The Acid3 score of Internet Explorer 9 went up to 68 out of 100. Not a perfect score by all means but the developers promise better compatibility in later releases. They do mention that the Acid3 test needs some revamping in their opinion.

A new user string is introduced as well as the capability to change the user agent string in the preview version of IE9.

There are four changes to IE8â€™s UA string that site developers need to be aware of:

Internet Explorer 9 Platform preview installs side by side with Internet Explorer 8. It is not suited yet for general purpose browsing as it is missing many major components including UI elements but also security protections.

The complete list of changes is listed in the release notes in the What's new section.