Norton Safe Web is an url scanning service offered by Norton, a company that is owned by security company Symantec. It scans websites and urls, and displays possible threats found on those websites to users of the service.

It is in this regard similar to other url scanning services like AVG Linkscanner or Web of Trust.

Norton Safe Web For Facebook is a Facebook application that uses the safe web database to scan a Facebook user's feed. The main benefit for the user is that the it will scan the feed regardless of the computer the user is accessing Facebook on.

There is obviously little advantage for Facebook users who access the social networking site from the same computer where they have proper security software and browser add-ons installed that warn about malicious links.

One could say that it adds more protection by offering a second opinion scan though of links posted on Facebook.

The real advantage however is that it works when you use public computer systems, a friend's device, or other devices that you don't have full control over and don't trust fully because of that.

The application scans the user's feed once it has been added to the list of installed apps on Facebook. 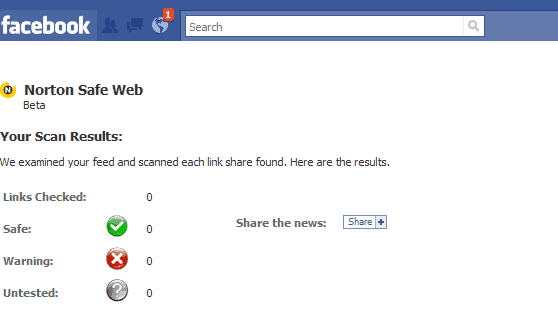 The report lists the number of links that have been checked in total, as well as the number of safe links, warnings and untested links. Users with no posts in the last few hours will only see zeros in the scan results. This is a bug according to Norton that will be fixed soon.

Norton is not providing many information about the application itself, especially when and how links are scanned. It is nevertheless interesting to see that security applications are finally starting to appear on Facebook even though this smells a lot like a clever marketing ploy to promote the Norton 2011 security software lineup of which Norton Safe Web is a part of.

Still, if you want to give it a try visit the Facebook application page of Norton Safe Web for Facebook to do so.

Update: The application scans the news feed on a daily basis even if you are not online and it can post warning messages to the timeline if malicious links are detected by it.