Hot off the press: Google has updated Google Docs with some major improvements. Google Docs is a document storage and editing service offered by Google.

Users with a Google account can upload documents and files to the service, view and edit documents online and save them to a local computer system.

Google Docs supports many of the major document formats including pdf, docx, txt and xls files.

The new additions that have been added today include:

We’ve brought the responsive, real-time editing experience you’ve come to expect from our spreadsheets over to documents, which means you can now see character-by-character changes as other collaborators make edits. We also added another popular feature from spreadsheets: sidebar chat, so you can discuss documents as you work on them with colleagues.

The new technical foundation also helped us improve document formatting, which means better import/export fidelity, a revamped comment system, real margins and tab stops, and improved image layout within documents. These improvements have been highly requested, but previously impossible to create with the older documents editor on older browsers.

We were not able to test this feature yet as it has not been activated for our account. Google noted that the feature will be available to all users in the coming days. It is likely that a New Version link will appear on top to switch to the new editor, exactly as the new editor is accessed when viewing a spreadsheet in Google Docs.

With the new spreadsheets editor, you’ll see significant speed and performance improvements -- spreadsheets load faster, are more responsive and scroll more seamlessly. We’ve also added a host of often requested features, like a formula bar for cell editing, auto-complete, drag and drop columns, and simpler navigation between sheets. And as always, real-time collaboration in spreadsheets is easy with sidebar chat and the ability to see which cell each person is editing. 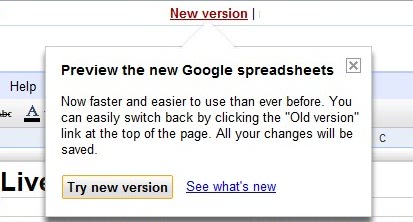 There is an Old Version link in the top header navigation, allowing users to switch between the new and old versions of the editor as needed.

Performance has been increased by Google including initial spreadsheet loading time, scrolling and edits from collaborators. The new additions to the editor all make sense. Prominent new features include the Formula Bar, a long requested feature, as well as autofill and column dragging and sorting

In the year since we launched the Insert drawing tool, we’ve received many requests for the ability to collaborate on drawings and make them accessible directly from the docs list. The new standalone drawings editor lets you collaborate in real time on flow charts, designs, diagrams and other fun or business graphics. Copy these drawings into documents, spreadsheets and presentations using the web clipboard, or share and publish drawings just like other Google Docs.

Drawings look a lot like presentations, with the main difference seeming to be that drawings are limited to a single page. Drawings can also be added to spreadsheets, presentations and documents.The drawings can be created in collaboration and are then accessible directly from the list of available documents and files.

Take a look at the video that has been created by the Google Docs team that showcases the new features.

Currently only the drawings and spreadsheet editor have been enabled for Google Docs users. The new documents editor will be enabled in the coming days. Google Gears users should note that these new editors are currently not compatible with the technology that powers offline access. Google promised however to add support for these new editors in future versions.

Google has concentrated their development efforts on performance and collaboration in this new Google Docs release. The lack of offline editing capabilities could prove to be problematic, but it should still be possible to use the old editors for that, at least for as long as it remains available.