Scite is a free Open Source text editor for Windows, Mac and Linux machines that is been designed specifically for editing source code.

The program supports many of the features of popular editors like Notepad++, and can therefore be seen as an alternative to those programs, at least on the Windows operating system. Scite can open multiple text files at once which are displayed in tabs in its interface.

When you load source code files you will usually notice that they are color coded automatically to improve going through the code. The example shown on the screenshot below shows comments in green for example which makes it easy to distinguish them from code that is executed when run. 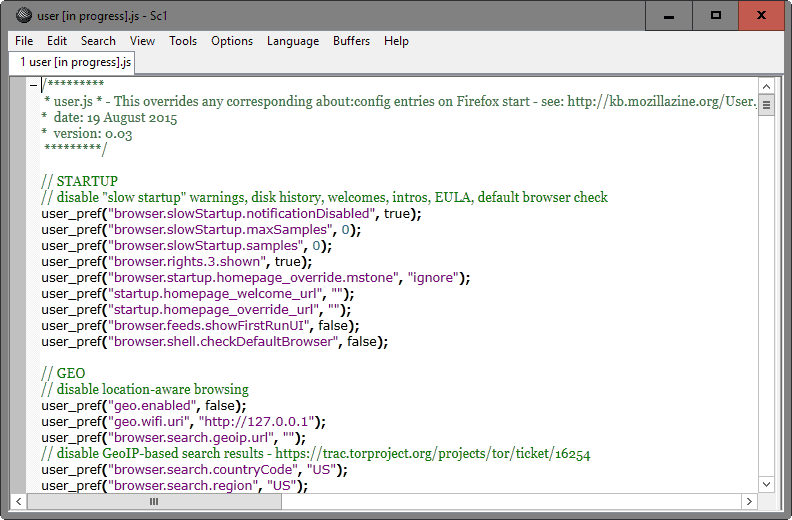 As well as features found in standard text editing components, Scintilla includes features especially useful when editing and debugging source code. These include support for syntax styling, error indicators, code completion and call tips. The selection margin can contain markers like those used in debuggers to indicate breakpoints and the current line. Styling choices are more open than with many editors, allowing the use of proportional fonts, bold and italics, multiple foreground and background colours and multiple fonts.

One interesting feature of Scite is the ability to compile or run source files directly from within its interface. This works if the programming environment is installed on the computer system, and if it is linked from within Scite. The output is directly shown in the editor's output pane in that case.

Console commands are available as well for users who prefer to work from the command line. They can be used to perform different commands like replacing text in files, searching for phrases, opening a document, or loading previously saved sessions.

Windows users can download a related program from the same developer called Filerx which adds project management and macros to the Open Source text editor.

While Scite has been designed for code editing primarily, nothing is keeping you from using it as a general purpose plain text editor. Since it is compatible with all plain text files, it is easy enough to use it for that purpose.

Scite is available for download at the developer's website. The program is fully portable and compatible with Windows XP and newer Microsoft operating systems.