Update: One Manga Reader and the One Manga website for that matter are no longer available. Use alternatives such as Manga Viewer instead which you still find listed in the Chrome Web Store. The extension supports various popular manga sites.

One Manga is one of the most popular free Manga resource websites on the Internet. It hosts a huge number of Manga which can all be read online, or downloaded to a local computer system for offline reading.

Between ten and twenty new Manga are added everyday to the website. This makes it one of the most frequented websites for Manga lovers.

It hosts many of the most popular Manga series from Naruto and Bleach, over One Piece and Fairy Tail, to Full Metal Alchemist, Hunter X Hunter and Kenichi.

Users can visit the website to find out what's new, subscribe to an RSS feed or use the recently reviewed Google Chrome extension Manga Lover which displays the latest releases directly in the web browser. 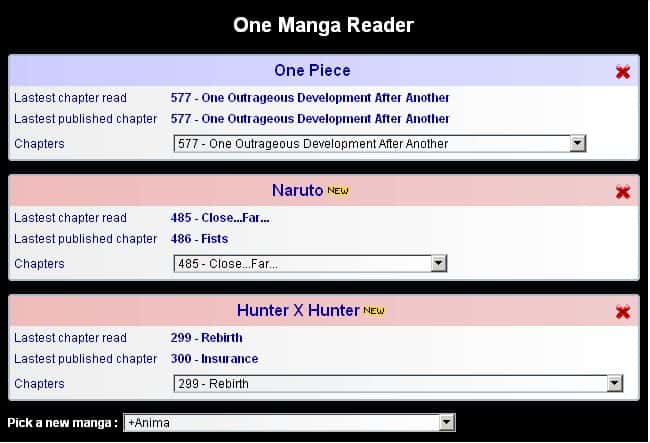 One Manga Reader is an alternative to the options described above. What does it do? For starters, it displays a list of all Manga series that are hosted on One Manga. That alone is not that spectacular but the following options are.

The extension provides a few options that can be configured in the Chrome extension manager. It is possible to remove ads from the One Manga website, display the Manga on one page instead of only a sheet per page, or display two sheets which is helpful for widescreen monitor users.

One Manga Reader can be downloaded from the Google Chrome Extension gallery.