Watch Live Football Streaming Online is a free browser extension for Google Chrome that lists live football streams that you can tune in to in its interface.

In time for the beginning of this year's Champions League and Euro League season is an extension for the Google Chrome web browser that makes it easier than ever to watch live football in the web browser.

The extension Watch Live Football Streaming provides you with quick access to the service offered on the connected website which lists live football streams that can be watched in the web browser. The only requirement is that Adobe Flash is installed in Chrome to do so as most rely on the technology for that.

The site concentrates on the UK football scene which is definitely one of the finest in the world but offers other matches as well. It covers the World Cup and Euro Cup for instance, as well as major internation leagues.

Note that it may take a second or two before the listing is populated. 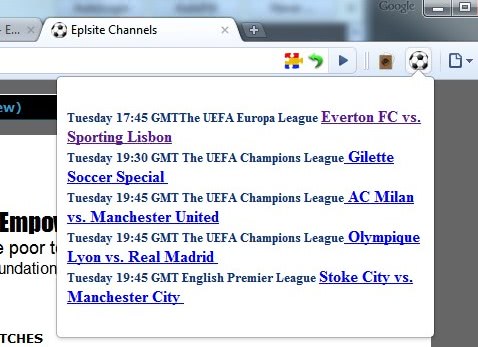 Today's matches include for instance AC Milan vs. Manchester United and Olympique Lyon vs. Real Madrid. The live football streams are displayed in a new window after you click on the link displayed by the extension.

The quality is ok but not excellent but good enough considering that it is free to watch. The site includes a small chat applet to chat with other viewers while watching the stream.

The extension is helpful for users who do not want to visit the site directly to find out which matches they broadcast live on that day. Everyone else who just wants to watch the major events like the Champions League or Euro League may be better of by visiting the site on those match days to find out which football games are offered.

Update: The most recent version of the extension displays all available streams for a match -- if multiple are available -- in its interface so that you can make a direct selection here. HD streams are indicated explicitly, but no additional information are provided regarding the quality of the stream or the language of it.