So-called Libraries are a new addition of Microsoft's latest operating system Windows 7; they are part of newer versions of Windows as well.

Libraries evolved from the "My-Folders" feature such as MyDocuments which were limited to a single location on the computer system.

Libraries on the other hand combine and display the content of multiple locations which is very helpful if photos, videos, music or documents are stored in different folders or even on different hard drives connected to the system.

They are virtual folders more or less that display files and folders from various locations as if they were all stored under a single root folder.

Update: The developer's website is no longer available and the program appears to be abandoned. We have uploaded the latest version of the application to our own server. Note that we don't support it in any way and cannot guarantee that it will work on newer versions of Windows. Click on the following link to download it: WinLibraryTool Microsoft has made available a command line utility that they appropriately named slutil.exe (no joke) which you can use to add network shares or locations to Windows 7 libraries.

A command line tool is usually not the most comfortable option as most users prefer to use graphical user interfaces.

That's the main reason why the Win7 Library Tool was created by Zorn Software. 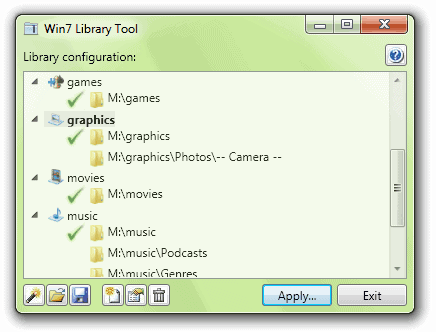 The program is controlled by icons in the status bar. The leftmost icon loads the existing libraries of the operating system. Other controls can be used to import or export libraries, create and delete libraries as well as to edit existing libraries.