File Checksum Integrity Verifier is a free command line program by Microsoft that can be used to create and verify md5 checksums of files in a specific folder.

The program can for instance be used to check if files in a specific directory have been modified, which is often the case if malicious software has been executed on the computer system.

This is done by calculating hashes of every file - or only specific file types - in the selected directory with the option to compare those generated the first time with hashes that have been generated at a later time. 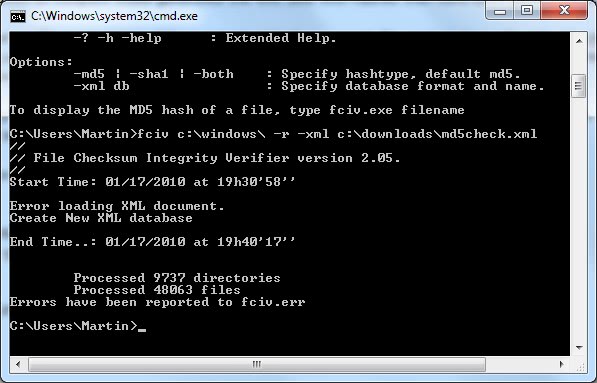 The File Checksum Integrity Verifier can be downloaded from the Microsoft homepage. The Microsoft Support page that lists the file download contains an explanation of the program's command line parameters.

The program needs to be unpacked after download. It is suggested to move the file fciv.exe into a system folder like the Windows folder so that it can be run without specifying a path but that is up to you.

MD5 hashes of a specific directory can be created with the following command:

It is possible to specify file extensions with the -type parameter followed by the filetype, e.g. *.exe.

The tool will display a list of modified files at the end of the comparison. It is possible to switch to use -sha instead of -md5. Users who want to verify the files regularly might want to consider creating a batch file for the file verification checks.

The tool can be very useful if you want to make sure that important files -- say files on a web server, documents, or program files -- have not been tampered with.

Update: Microsoft has removed the program from its servers, it is no longer available. You can check out the third party alternatives File Check MD5 or File Verifier++ which offer a similar feature set.

Update 2: And the tool is up again. You can download it from Microsoft with a  click on the link in the summary below.

Martin Brinkmann is a journalist from Germany who founded Ghacks Technology News Back in 2005. He is passionate about all things tech and knows the Internet and computers like the back of his hand. You can follow Martin on Facebook or Twitter
View all posts by Martin Brinkmann →
Previous Post: « Volume Control During Startup
Next Post: What Is My Computer Doing »